Offwrist, the Office for Wanking, Rubbing and Independent Sexual Techniques, said the images would encourage men to think about grown women in short skirts in an inappropriate way.

"A model in her mid-twenties wearing a teeny, tiny little skirt, a tight top and showing a mouth-wateringly tantalising degree of midriff is not an appropriate image for frenzied sexual daydreaming.

"Parliament has given us the statutory responsibility to control the supply of masturbatory stimulants.

"The last thing we need is this scorching hot woman staring out at me all day, telling me she wants me and urging me to abuse myself. Just look at that skirt, I mean Jesus Christ."

He added: "Thank god she wasn't sucking on a pencil because, quite frankly, I wouldn't have time for this interview."

Julian Cook, of the Consumers Association, said: "Perhaps the next Ryanair advert could show a picture of a dilligent schoolboy trying to work out why the advert said a flight to Barcelona would cost £7.50, but he's actually been charged ten times that."

Foreigners Told To Have Their Babies In The Sink 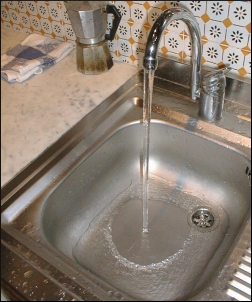 FOREIGN mothers who think they can just come over here and have their baby in an NHS hospital have been told to give birth in the kitchen sink.

New figures show the NHS is being flooded with grasping, olive-skinned women demanding the 'right' to have their baby delivered by a trained professional who has washed their hands.

Now ministers say the free ride is over and have told immigrant scroungers to get out the Vim and give their spice-ridden kitchens a good scrub down.

Health secretary Alan Johnson said: "The NHS was not set up to help dirty, foreign babies into the world.

"These Eastern European mothers see pictures of our exquisite birthing suites on their stolen laptops and before you know it they are packed into stolen people carriers and heading our way on board stolen car ferries.

"As for the Africans and the Asians, they have spent thousands of years squeezing their babies into a hole in the ground. Why on earth would they want to throw away their proud cultural heritage?"

Mr Johnson said that from April non-British mothers will be turned away from NHS hospitals but given a leaflet showing them how to climb safely onto the kitchen worktop and position themselves over the sink.

He added: "Probably best to use a chair, then once you're actually over the sink, hold on to the taps or perhaps the curtains if you're near a window."