PEOPLE in their forties are a bunch of whingeing shits who should count their blessings, according to new research.

Henry Brubaker, of the Institute for Studies, said it was unclear why comfortably off forty-somethings should complain all the time, but he suspected it was because they were horribly self-absorbed.

He said: "Your average 40 year-old should have a good job and a nice house, a family and will be looking forward to the death of his parents so he can pay off the rest of the mortgage.

"If you're a women the worst that can happen is your husband runs off with a teenager even though she has to lift up his beer belly just to get it in, and will then leave him after a week for someone who's not suffering from stress-related impotence.

"Of course, he then ends up in a bedsit while you get the house and half his pension and you don't have to have sex with him every time you want new shoes."

Roy Hobbs, 85, said: "I didn't fight Hitler for six years so these bastards could take to their beds because they've got crows feet and a bald patch."

Winehouse 'Most Likely To Choke On Own Vomit' 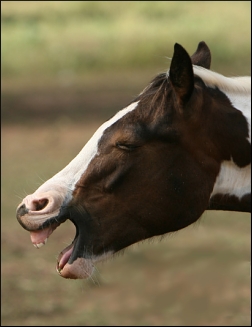 AMY Winehouse is leading the field as the star Most Likely to Choke on Their Own Vomit in this year's NME awards shortlist.

The crack-smoking pop horse faces competition from lanky junkie Pete Doherty, despite the Babyshambles frontman spending £3000 on having his throat widened.

McNichols said: “Other pop stars like David Bowie and Bryan Ferry have flirted with the iconography of the Third Reich but only Morrissey rubs himself against a picture of Hitler every morning.”

Battling it out for best newcomer are The Shitters, My Chemical Toilet, Cradle of Fluff and Jim Jam Jim and the Jim Jammers.

Worst band is a four-way fight between Crib Fiddlers, The Spunks, Granny Quim, and Panic at My Arse Grapes.

Ike Turner has secured nominations for Most Dead and Most Alive, and for Man Most Likely to Kick Shit Out of His Wife While Off His Head on Smack.

The Arctic Monkeys are again leading the pack in Band Gordon Brown is Most Likely to Lie About Having Heard Of.

Meanwhile Sting is the current favourite to land the Chris de Burgh Award for Being a Complete Fucking Cunt.