Secret to happiness ‘is to ignore everyone and everything’ 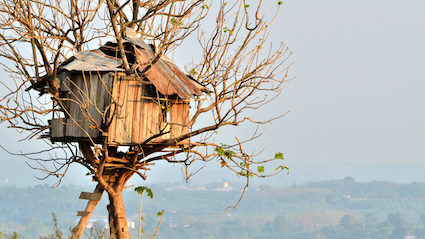 PURE contentment can be attained by paying no attention to anything around you, experts have confirmed.

The Institute for Studies found that the happiest members of society are those who have as little to do with society as possible.

Professor Henry Brubaker said: “The happiest man we found lived in the woods.

“He had installed razor wire around the perimeter of his tree house so that nobody could get near him.”

Professor Brubaker stressed that living in a city was ‘obviously insane’, but warned against moving to a cottage in the country in the hope of escaping other humans.

He added: “People in anoraks will walk past your house and you’ll probably be near a village full of weirdos.

“Just live in a tree. Or a hot air balloon.” 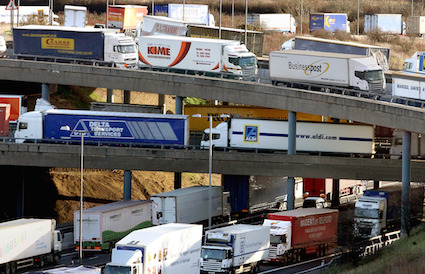 A GROUP of lorry drivers amazed motorists with a formation display that lasted a full 14 junctions.

The trucks, which varied in nationality from British to Portuguese, formed shapes including diamonds, an eye and a dollar sign all of which took up three lanes and were impossible to pass.

Hooted on by an enthusiastic crowd including several emergency vehicles who added their flashing blue lights to the spectacle, the display lasted two hours, covered 112 miles, and created a 22-mile tailback of excited fans.

The HGV Angels captain Stephen Malley said: “There’s one formation called the Cloverleaf that takes 50 miles on its own, all done between 54mph and 56mph – you need to be in a helicopter, but I like to think a Ford Ka three miles back gets a hint of the glory.

“Our final move is the Firework, where we clear the middle lane and the cars rush through it, fountaining out in a silver burst of rapidly accelerating BMWs.

“Like all great art, it truly elevates the soul.”