SELF-RIGHTEOUS Facebook refusers are really loving this current data hoo-ha, it has been confirmed.

Facebook avoiders have responded to the ‘data breach’ scandal with pitying sighs and mild smirks as they wait to be congratulated.

Social media refusenik Stephen Malley said: “It’s very unfortunate the way you people have been exploited, one might say duped, into handing over vital data to a faceless corporate monolith.

“Actually I have been known to call it ‘Facelessbook’. I came up with that.”

Malley’s friend Roy Hobbs said: “He’s trotting around on his high horse now because he always told me Facebook was a ‘suspect operation’. Look at him sitting there, all puffed up like a proud little toad.

“He seems to think I’ve forgotten about the time that he joined, couldn’t get his profile picture to go portrait rather than landscape, then quit again in a strop.”

Dog in coffee shop wishes he was at the pub 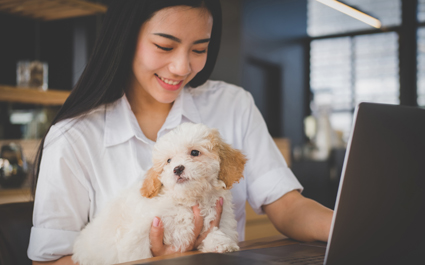 A DOG allowed into a trendy coffee shop would much rather be in a carpeted pub listening to workmen’s dirty anecdotes, he has confirmed.

Dog Wayne Hayes complained that the high-octane environment of an aspirational cafe fuelled by nuclear strength caffeine is triggering his anxiety.

Hayes said: “I’ve just had to listen to a couple of mums high on piccolos talk rabidly for an hour about some buggy called the Tooti-Shitstorm-Butterfly.

“I just want to be on patterned carpet, breathing in the smell of stale beer and Frazzles while I drift off to sleep to the bleeps of the fruity.

“Then I’ll wake up to hear a guy in his late sixties who still lays tarmac telling anecdotes about the best way to have sex with a marrow. That’s an afternoon out.”

Hayes added: “A man in a woolly hat and apron has just nudged some water in a jam-jar at me. What’s their policy on biting?”