TEENAGE boys are to be given lessons in how to release the vice-like grip on their penises for five minutes and get some sleep.

A pilot scheme has been launched in Glasgow amid fears some teenagers are now getting less than four hours sleep a night due to a combination of being teenagers and having relatively fresh genitals.

Professor Henry Brubaker, of the Institute for Studies, said: "It's all about taking it one step at a time. First of all we attempt to distract them from their groins by shining a small torch or a laser pen.

"Then, starting with the pinky, we take each finger and gradually unhook it from the penis, before using a pair of pliers and a chisel to prise apart the thumb and forefinger.

"Once we are sure they are comfortable with the substitute we then hit them on the back of the head with an omelette pan and bring them round eight hours later."

Professor Brubaker added: "Parents who want to stop teenage girls staying up all night talking on their mobile phones and using the internet simply need to remember that it's their house and their daughters can either shut up or piss off."

Meanwhile a similar scheme in Darlington is aiming to teach young people how to breathe. 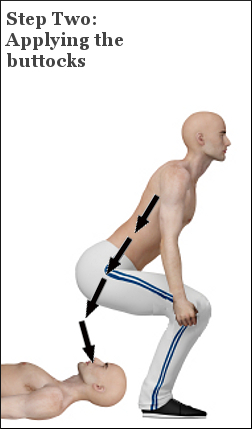 ENGLAND'S World Cup hopes were back on track last night after Tom Cruise said he could heal his friend David Beckham using nothing more than a simple Dianetic mind poultice.

The Hollywood superstar said he had treated more than 10 million injuries exactly like Beckham's and that the midfielder would soon achieve the physical perfection of the mighty Thetan overlords who invented football more than 15 trillion years ago.

Dr Julian Cook, director of the L Ron Hubbard Sports Injury Clinic, said: "If you were to examine David you would see that he has in fact pulled the tendons inside his brain and they can only be unpulled with the timely application of a grade-four mind poultice."

According to Cook the treatment will involve Cruise putting on a skin-tight silver jumpsuit, a pair of protective goggles and the Electric Gloves of Arkammon before sitting very carefully on Beckham's face.

He added: "David must lie perfectly still while Tom slowly rubs his bottom against the nose and forehead using small circular motions and humming very gently.

"The super-intelligent healing electricity from Tom's armpits will pass down his spinal column before being fired at high speed out of his anus and into David's nostrils where it will then make its way to the injured brain tendons."

An FA source said: "This has to work. Defensively we're strong and Rooney's on fire but we are short of options when it comes to whiny-voiced clothes horses with comprehensively unbearable wives."

Meanwhile the Beckham injury brings the number of potential England excuses to four including altitude, car-jacking and a fresh wave of John Terry skank explosions.

A spokesman for Cruise said last night: "This is an act of friendship and no money or favours are expected in return, though if David did want to get a tattoo on his back which depicts Tom sitting on his face that would be a lovely gesture."