The patron saint of lost Hermes parcels, and other saints the modern world needs

IF CATHOLICISM ever wants to be as big as BTS, it needs an upgrade and new saints to pray to. Which ones do we need the most?

Saint Valentine covers actual lovers, but hapless daters who get ghosted four times a month deserve their own. They can say a little prayer every time they go on another doomed date. It won’t increase their chances of getting a shag someone but it might give them someone else to monologue about their previous failed relationships to.

St. Anthony is the patron saint of lost things, but in a papal edict last year he said he ‘is not f**king touching’ Hermes parcels. We need a saint with the power to condemn drivers to hell on-the-spot when they boot a parcel over a hedge or conceal it deep in a bin on bin day.

Finishing 2021 as one of the most loathed groups of people in Britain is quite an achievement and should be rewarded with a spiritual guardian. If they’re not being imprisoned they’re being screamed at by women in Range Rovers, so they need something to place their faith in.

The Tories used to have their own saint, but Thatcher sold it off in the 80s. Now millions of voters are in spiritual crisis about how to be the moral, responsible ones when they put a party clown in charge. Saint Dominic, the patron saint of criminals, wants nothing to do with it.

Do people so wilfully careless with other people’s lives deserve a patron saint? Well, it’ll be too late for vaccines when they turn up on a Covid ward but it’s never too late for prayer.

Adele is so universally adored that the Pope will be more than happy to canonise her while she’s still alive. She won’t have to do much different to continue to be the spiritual protector and guide of heartbroken women who’ve been on the merlot, but it would be nice to make it official. 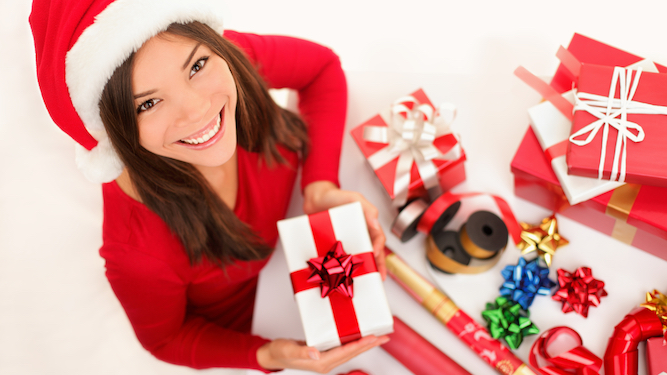 WRAPPING time is here again, and so is lifestyle influencer Carolyn Ryan’s guide to the perfect department-store wrapped parcel. Follow these steps:

Get a gift – we all have to start with something to wrap! Wrapping without a gift ensures disappointment.

Choose a part of the house where you won’t be disturbed by gift recipients. Ideally a room with a table, or a carpet, but the downstairs loo will do. Pretend you’re constipated.

Get your wrapping paper. Should be hand-selected to go with gifts but if all you’ve got is Spider-Man paper from one of your nephew’s birthdays, fine.

Look for a pair of scissors that aren’t the kitchen scissors you use to open raw chicken.

What has happened to all the bloody scissors in this house? Where do they go?

Relent and use the salmonella scissors.

Look for the sticky tape you bought last year for this exact purpose.

It’s nowhere. Pop to the post office to buy more but they’ve only got parcel tape. Great.

Make yourself a cup of coffee to prepare for an afternoon of present wrapping. Put on Christmas tunes.

Attempt to wrap a present. Attempt again. Turn off Christmas tunes and stick on YouTube video called ‘How to Wrap a Present’.

Vow to only ever buy oblong gifts for in future.

Finish first present. Pour yourself a glass of spirits with shaking, traumatised hands and down it in one.

Consider cutting all ties with all friends and acquaintances to avoid ever having to wrap a present again.

Have a moment of revelation.

Stick the rest into a gift bags with scrunched-up tissue paper.