Tossers announce plan to 'step back' from social media over Christmas

PRETENTIOUS tossers are unnecessarily announcing that they want to ‘unplug’ and ‘take a few days out’ from social media over Christmas.

The dreary, delusional tosspots believe their coming off Facebook or not putting beach pictures on Instagram is an emotionally-charged societal gamechanger equivalent to Mandela’s walk to freedom.

Professor Henry Brubaker of the Institute of Studies explained: “These are the kind of people who take forty-five minutes to say goodbye to everyone before leaving a party, or who genuinely believe you’re interested in their holiday or the dream they had last night.

Social media enthusiast Nathan Muir said: “After a year of building my ‘personal brand’ on Instagram with some amazing food pictures that have been both touching and funny, it’s time to ‘reflect and re-focus’.

“It’s partly about wanting space to embrace the moment, and partly that there is no reception at my parents’ and Dad won’t let me on the wifi since I live-streamed a tour of their house at Easter.

“I hope my seventy-three followers aren’t too disappointed.”

The Mash guide to Christmas with your favourite politicians 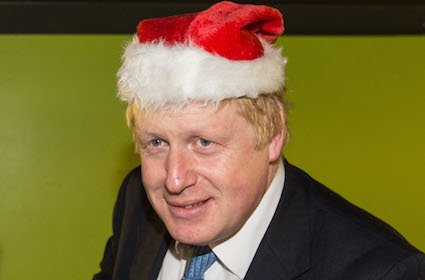 HAVE you ever wished you could spend Christmas with Diane Abbott, Iain Duncan Smith or better yet both?

Find out what joys would be in store as Britain’s top politicians describe their festive plans.

After a lie-in in respect of all the workers who cannot have a lie-in, I’ll rush downstairs to find out what new biographies of Lenin have been left under the tree. Then it’s a vegetarian roast and a traditional Christmas film like Equalos No Fascismo, Pablo Gómez’s three-hour documentary about the 1970s Bolivian trade union movement.

I’ll be starting the day by going to church, because my faith is very important to me and God’s always keen to be updated on how well Brexit is going. Then it’s home for Christmas dinner and the Queen’s speech, then the Queen’s speech again, then again. Because that proves I back Britain more than my rivals. Then again.

On Christmas day I like to go for a bracing walk, perhaps with 500 or so friends in bowler hats with military-style drums chanting the traditional festive greeting of “NO SURRENDER!” There’s nothing wrong with it, it’s traditional. Anyone who says it’s prejudiced is lying. Then it’s off to church to pray for the destruction of the antichrist the Pope, followed by Ulster Unionist carols like No Gays in the Manger. It will be lovely.

I’ll begin with church, a normal church and definitely not an ancient hidden temple to Nommo the fish god, then a traditional roast with English sprouts instead of the inferior Brussels ones. We always take time to think of those less fortunate than ourselves, or as my wife put it in the Daily Mail yesterday, ‘Get these scrounging homeless Romanian bastards off our streets.’

For me Christmas is all about japes! In a way Jesus was the first japester, what with all that bonkers walking on water malarky. Yes, chez Johnson it will be non-stop hilarious japes like sliding down banisters and singing O Come All Ye Faithful in Latin. Then I’ll retreat to my study for several hours and contemplate the terrible, terrible mess I’ve made of my life.

Christmas is the very essence of Britishness, so I’ll be spending it in Washington fellating any alt-right weirdo, nonce or fascist who might introduce me to my close, close friend Donald again. That’s the great thing about Brexit – it restores your national pride.