Robin in garden is not dead nan visiting for Christmas

A ROBIN has confirmed he is not the vessel of a deceased grandparent returned to visit the family for Christmas, and is just eating some seeds.

The misunderstanding arose when the robin alighted on a bird-table outside the window just as Mary Fisher was discussing her much-missed grandmother.

Mary said: “It was like a sign from the heavens. Just as I mentioned Nana Fisher, there was the robin bold as brass with a cheeky look in its eye the very same as hers.

“As it nibbled the fat balls I said ‘Nana? Is that you?’ and it gave me this wise look as if to tell me everything was okay and to stop fretting, just like she used to, before flying off. Probably to our Jason’s.”

However, robin Wayne Hayes said: “There’s a birdfeeder by the window and I need protein-rich food to make it through winter. It’s that simple.

“I am not now, nor have I ever been, the spiritual vessel of a dead human.

“The spirit of Mary’s nan is actually inhabiting her Canon MG5700 colour printer. Those paper jams are a sign. She hates you.” 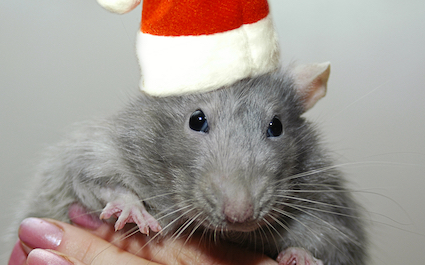 THERESA May’s last remaining ally in cabinet is an imaginary rat called Bixby that wears a hat, she has confirmed.

She said: “I don’t exactly remember appointing him. One day, shortly after the election, Bixby was just there.

“He’s such a smart little fellow in his little hat, whispering all the secrets about who’s plotting against me and how I’m making such a success out of Brexit.

“Sometimes he sits on my shoulder during cabinet meetings, telling me that they’re all liars and I should have them imprisoned for treason, and it’s dreadfully funny because they can’t hear a word.

“Look, here he is, dressed as Santa! I’m thinking of making him chancellor in the reshuffle.”

A Downing Street source said: “Oh Christ, not Bixby. I thought he went when Thatcher did.”