Treasury Has Been Able To Print Tenners All Along

CHANCELLOR Alistair Darling has admitted the economic downturn was completely unnecessary as all this time he could just have printed more tenners.

Mr Darling said he found out about the money printing machine last summer but then forgot to mention it because he had been given so much work to do by the prime minister.

He added: "Last Friday I was visiting a school in my constituency when one of the children asked why I didn't just print more money, and I suddenly thought, 'Oh Christ, there's that great big machine in the basement'."

Tom Logan, from West London, said: "If it's just a case of printing it, I'll have six million please.

"I don't suppose there's any way you can print some with my face on it? Or perhaps just a pair of titties?"

But economists warned that printing new currency could create a confluence of hyper inflationary factors leading to a collapse in sterling and the entire country being consumed by an unquenchable fire.

Emma Bradford, from Stoke, added: "I've absolutely no idea what you're talking about. Just give me the money." 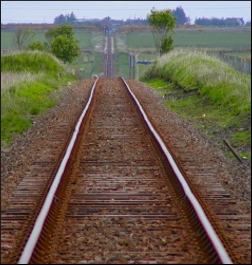 BRITAIN'S piece of shit of west coast railway line has been designated as the country's latest national metaphor.

Officials say the pathetically bad multi-billion pound engineering project can now be used to sum up early 21st century Britain as a place where everything is expensive but nothing actually works.

The West Coast mainline becomes Britain's 27th national metaphor since the end of the Second World War and the first since Tim Henman tried really hard but was obviously just not good enough in 2004.

Julian Cook, director of the Office of National Metaphors, said: "It's the perfect combination of gigantic amounts of public money and the gnawing inevitability of failure and disappointment.

"It's probably the best one since the M25 was completed and became this huge, grey, hell on earth, filled with angry, depressed people unable to find a way out.

"The West Coast mainline even has the chance of a second designation at some point in the future as they will no doubt get it working properly only to start fucking about with it again for no reason."

A blue plaque will be erected at Euston Station in London to commemorate the designation with the quote 'Britain and the West Coast Main Line – expensive, badly designed and not as good as France'.

Mr Cook added: "Of course we're all just building up to the 2012 Olympics which I suspect will make all previous national metaphors seem devastatingly obsolete."