THE Apple TwatPhone has topped the list of items owned by twats, it has been confirmed.

Twat organisation Twat Brand Analysis polled its database of twats to discover which twat accessory was this year's ultimate in twat.

A spokesman said: "Aston Martin topped the twat poll for three years with twats who don't actually own one but, because they're twats, think it would be cool if they did. It is the very essence of twat.

"However, the recession has down-scaled aspirational twathood, making twats covet the sort of affordable gadgets that helps them constantly update and redefine the type of twat they want to be."

He added: "The TwatPhone enables them by being at the very twatting-edge of new twatology."

Other leading twat brands include Rolex, Dom Perignon and Ferrari, suggesting that many twats think they are living in a Jay Z video instead of a 12 year-old Barrat estate on the outskirts of Reading.

But the top 10 was once again dominated by twatology brands such as Nintendo, YouTube, BlackBerry and Bang & Olufsen, confirming that people who care about things like brands actually have few real friends and very little to do except sit at home in the dark watching the light flickering across a dozen sad little screens.

The TwatPhone was released in 2007 as the ultimate accessory for people who need a personal organiser and mp3 player that is also a camera, a games console and a really bad phone.

Hatfield-based twat Charlie Reeves, said: "I work in the claims department at Direct Line and live in a very small flat above a key-cutting shop.

"How else am I supposed to pretend that I'm really Tom Cruise in Minority Report? You tell me."

Children Should Be Raised In The 1950s, Say Experts 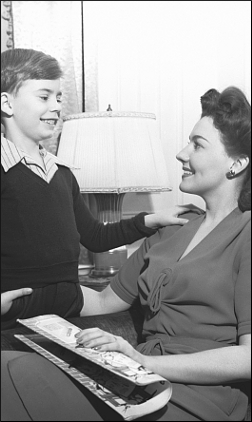 BRITISH children will be much healthier as soon as they start being raised in the 1950s, according to a new study.

The Institute for Child Health said modern child rearing had failed and called for all British children under the age of 16 to be sent back to 1953 where they could spend their days eating ripe Dorset peaches and running alongside steam trains.

The study found children are healthier if they are brought up by a mother who wears a starched white pinafore, knows how to bake a pie and organises tasty food parcels for our brave boys in Aden.

A spokesman said: “The early 1950s is now the optimum environment for successful child rearing thanks to an abundance of skipping ropes and fresh cabbage and the welcome absence of a certain Mr Cliff Richard.

“And of course, children can enjoy a healthy diet and a rigorous exercise programme secure in the knowledge that their mother will not be going out to work everyday like a common prostitute.”

He added: “If we hurry we can send them back just in time for the Coronation.”

Mrs Margaret Gerving, a mother of two speaking from 1953, backed the study, adding: “While I do not agree with the having of opinions I must admit to being puzzled as to how these women find the time to be typists and telephonists and what have you.

“After a full day of baking, roasting and boiling I have barely enough energy left to be taken roughly from behind by my darling Trevor.

“Now, enough of politics, who would like a nice piece of my raspberry tinkle?”