A WOMAN has divorced her husband after he used the computer game World of Warcraft to conduct affairs with a series of imaginary woodland creatures.

Mrs Logan said: "I was proud that my husband was a level three Night Elf of Azeroth and I fully supported his efforts to suppress the Undead Forsaken of the Lich King's Horde.

"Little did I realise that while his comrades risked their pretend lives in blood-soaked combat, he was in a dark corner of Ashenvale Forest taking goblins up the back passage.

"It all came to a head one Sunday afternoon. I brought him a cup of tea, expecting him to be slaughtering his way through a column of Orcs, but instead, there he was, slap-bang in the middle of some hellish daisy chain."

Mr Logan insisted he would never have allowed his love of goblin sex to spill over into his actual life, but did admit he was currently trying to build his own dragon.

He added: "It is quite difficult to get an animal to breath flames.

"You basically have to use a small propane cylinder with a rubber tube that goes through the skin, into the lungs, up the windpipe and has small pilot light on the end.

"At the moment I'm working on a fire-breathing alligator strapped to a micro-light."

Nothing To Fear From German Economic Collapse, Say Experts 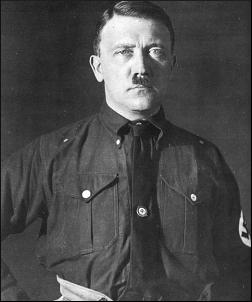 THE world has nothing to fear from the collapse of the German economy, experts insisted last night.

As the Polish and Czech currencies plummeted and prime minister Gordon Brown flew to Munich, Henry Brubaker, of the Institute for Studies, said Germans were excellent at dealing with economic disruption and were very unlikely to follow a far right demagogue into a hugely destructive global war.

Any difficulties the country did face would be dealt with by the mass production of a small family car, the construction of a motorway network and a vast and terrifying programme of re-armament.

Brubaker said: "We've been here before, and if history is our guide, the German people will all pull together, whatever creed or colour, to get out of this mess.

"Then again, and this is purely a precaution, if you do live in Strasbourg you'll probably want to tape up your windows and get some sandbags in.

"And I'd also suggest that Gypsies get a haircut, a nice shirt and a tie and do their best to develop a Bavarian accent."

He added: "For some reason, which none of us can fathom, some joker keeps on taking all the batteries out the smoke alarms in the Reichstag."

Meanwhile French president Nicolas Sarkozy has suggested Nice or Biarritz as the capital of unoccupied France, insisting Vichy does not have a decent fish restaurant.