THE unemployed are to be relocated to a magical land full of talking
animals and cute, furry
jobs, the government has confirmed.

In echoes of a speech given in the 1980s by his dad, Mr Duncan Smith said that jobseekers who were not prepared to leave this dimension were being ‘unrealistic’.

He added: “The people of Bilbon are crying out for hard-working humans to perform any number of well-paid whimsical fairytale tasks, such as working in the floating castle where dreams are made, or picking and processing the cartoon fruit that run around on little human legs getting up to all sorts of hi-jinks.

“It is the diametric opposite of Sheffield.”

Jobseekers who refuse to relocate to Bilbon will have their benefits
stopped until they are forced to squat in the dreary council house they
have been defiling for the last 20 years.

Unemployed man Tom Logan said: “I’ve been out of work for so long I’ve started referring to certain episodes of Murder She Wrote as ‘classics’. Plus I keep catching hepatitis from the touch-screen monitor in the job centre. Sorry, ‘Job Centre Plus’.

“Anyway, I’m ready to try the annoying-sounding fairy place. I don’t relish the prospect but on the other hand I’ve always quite fancied the Caramel rabbit. I reckon she’d be very bendy.”

However Bilbon pensioner and pipe-smoking badger Bill McKay, said: “Despite being a talking animal with half moon spectacles perched on the end of my nose, I have unremittingly strident views on immigration and you’ll find that many of my fantastical friends feel the same.

“Bilbon is only a magical land of joy and wonder because we’ve managed to keep all them fuckin’ gypos out.” 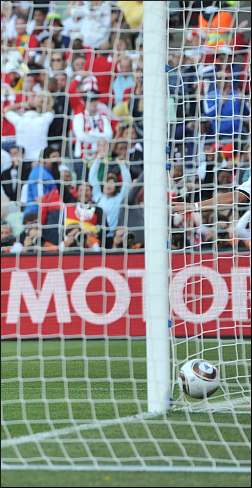 ENGLAND are heading home from the World Cup today after state-of-the-art video technology showed the ball crossing their goal line many, many times.

As questions were raised over why the Uruguayan officials had spotted all four German goals, the specially positioned cameras around the Bloemfontein Stadium confirmed that England’s 2010 squad will forever be remembered as the ‘team that never was’.

The use of television has been a source of controversy in the sport, but experts insist it offers a fool-proof method for determining whether a team is good at football or whether it is simply a collection of absurdly over-compensated, second-rate commercial brands with ghastly, vulgar wives, locked in a sado-masochistic relationship with a cretinous media that merely reflects a society that has taken its natural intelligence, its sense of perspective and its values and violently drowned them all in a bucket of piss.

Professor Henry Brubaker, of the Institute for Studies, said: “The technology is very complex and involves cathode tubes, a large glass screen and pretty much an entire roll of tinfoil.

Back home England fans vented their fury at the technology, as Paul the Psychic Octopus predicted Fabia Capello would soon be receiving a cheque for Â£12m and moving to a country where people can understand what he’s saying.

Roy Hobbs, a flurry of opinions from Stevenage, said: “Alan Hansen kept going on about how it could have been 20 or even 25-nil and that if he had done that at Liverpool, Bob Paisley would have slashed him across the arse with a machete.

“But I think it could easily have been 70 or even 290-nil. Unless of course Lampard’s goal had counted, in which case England would have won 14-2.”

Nathan Muir, from Hatfield, added: “Not a good day. And after Sebastian Vettel beat Lewis Hamilton in the grand prix, I half expected to come home and find my missus having a dirty bath with the lead singer of Boney M.”

Meanwhile, central defender John Terry finally arrived back in England’s 18-yard box last night only to find that everyone else had gone home.

He eventually got out of the stadium after climbing over a fence.