A WARHAMMER dwarf has been struggling to make conversation after being mistakenly tidied away in the same shoebox as the Bear Family of Sylvania.

Ghorth the Cruel, a Sorceror-Prophet from Zharr-Naggrund, was separated from his fellow Chaos Dwarves following a hasty clear-up and was instead put away with Mr and Mrs Bear and their cubs.

Ghorth said: “They’d been eating scones and having a chat about needlework, but they stopped when I arrived, which was a bit embarrassing.

“I think they might have been intimidated by my armour, or my face tattoos, or maybe my axe that burns with the unearthly fire of an evil god.

“I had to break the ice somehow, so we talked about the weather a bit, and how boring it was in the shoebox, and it turns out we actually have quite a lot in common. We’re both massive fans of James Patterson thrillers and Classic FM.

“The Bears are all right. When the Dark Lord comes to enslave the planet, they’ll be sacrificed last.”

Mrs Bear said: “Ghorth taught us some very interesting facts about ballistics, evil magic, and how to kill elves in melee combat.

“He’s promised to come round for a nice cup of tea and some homemade apple crumble, and he’s invited us all to the Tower of Desolation where we will drink from the skulls of his enemies.” 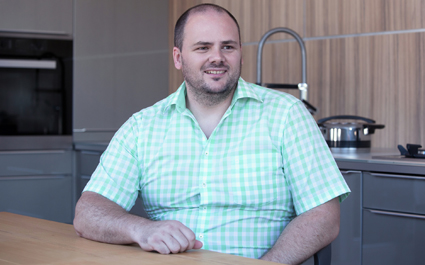 YOU’D never know it to look at me, but if you know football and you’re online, we’ve probably clashed once or twice.

Yeah. They call me RedGlory90. And I’m pretty much famous, on the football forums.

Had a go at Liverpool’s front line? That’ll have been me, tearing you a new one? Tried to claim your team deserves to be recognised as the greatest in England? I was the guy setting you fucking straight.

Remember “Messi can only be considered ‘great’ because he’s never had to compete with Ian Rush”? That was mine. “Liverpool’s net spend under Klopp is less than Sunderland’s”? That was me too.

Of course, I can’t always go by the same handle. Sometimes it’s taken, or occasionally I’ve been unfairly banned for taking to task some ManUre idiot who dares to suggest Alex Ferguson’s record can begin to compare to Bob Paisley’s. Certainly I have made threats of physical violence, but they were very clearly a joke and anyone who doesn’t realise that has no sense of humour.

But I believe the vast majority of fans I interact with respect my cogent arguments, backed up with evidence, and have walked away convinced that I am a reasonable man and that Liverpool are now, and always have been, indisputably the greatest team in Europe.

And seriously, if FergieFergieFerg cracks one more comment about Gerrard slipping on his arse I’m sending armed police round to his house. Wanker.