A WELL-PAID worker has admitted his job essentially consists of him just formatting Word documents, it’s been revealed.

He said: “I’m not saying that what I do involves absolutely no skill, because if my team understood how to use Word properly I would have absolutely nothing to do. But what I’m saying is it’s definitely not a skill worth £52,500 per annum.”

Malley also revealed he feels bad for earning more than a junior doctor: “The only way my job could become a life or death situation would be if someone had a condition where seeing the font Comic Sans induced them to have a stroke.

“But my job is safe as long as nobody else finds out how to print multiple copies of a document.” 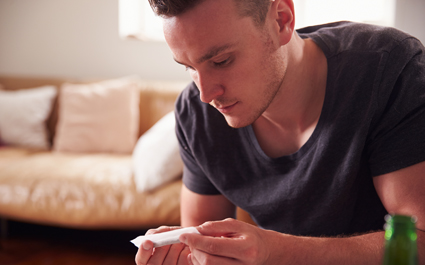 A MAN who keeps talking about ‘living in the present’ is actually just really fucking skint, it has been confirmed.

Tom Booker will wank on to anyone about how he has found enlightenment and is now fully living in the moment, but is less eager to discuss the fact that he is also living in the spare bedroom of his parents’ semi.

Close friend Nikki Hollis said: “His dad says he has to move out next month and I asked him where he was going to go. Apparently I ‘need to stop tripping about the future’ because ‘the universe will provide’.

“Which is weird because I didn’t know the universe had a spare sofa bed.”

Booker is also emphatically preaching the benefits of minimalism, but those close to him suspect this is the result of his girlfriend kicking him out and giving away all his clothes and computer games when she found out that he was cheating on her.

He explained: “We get so caught up in these societal concepts, like time and money, but they’re meaningless. Can I borrow a tenner?”