A WOMAN applying make-up on a train is receiving moody stares from a man who has been scratching his balls throughout the journey.

Wayne Hayes has spent the 25-minute commute repeatedly raising his eyebrows and tutting at Mary Fisher between moments of rummaging in his groin like a zoo animal with lice.

He explained: “Look at her, trowelling it on. It’s disgusting and inappropriate.

“This train isn’t your bathroom, sweetheart. Some ladies need to learn the difference between public and private.”

Hayes then inserted his hand into his underpants once more, rearranging his genitals several times before wiping his hand on the seat next to him.

Fisher said: “I just want to get my blusher done quickly so I can slather myself in hand sanitiser to ward off his gonad germs.”

Hayes was later seen eating a bag of cheese and onion McCoys on the train, using the same unwashed hand.

Cat's owners unaware of its reputation as mental bastard 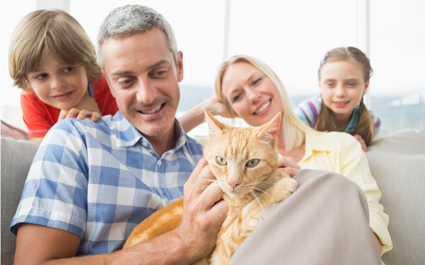 THE owners of a ginger cat are entirely unaware that it is locally notorious an absolute mental bastard.

The Booker family believes its pet George to be a slightly intense but otherwise fairly standard cat who likes belly rubs and sleeping on the spare bed.

However other local humans and animals see George as a crazed, demented beast fuelled by a deep burning rage.

Neighbour Emma Bradford said: “I saw that cat in our garden fighting a fox and a crow simultaneously.

“The crow flew off and the cat jumped on its back, biting its beak and neck until they both crashed to the ground. Then the cat just ambled off like nothing had happened.

“If I see it on the fence I make the children come in. I wouldn’t be surprised if it tried to drag one of them up a tree.”

Local postman Wayne Hayes said: “One day I reached into my post-bag and felt a searing pain. Somehow that cat had got in there and bitten off the tip of my thumb. I swear it has supernatural powers.”