Words 'Royal' and 'baby' only acceptable in potato context

BRITONS have been told to stop using the words ‘Royal’ and ‘baby’, to avoid destroying them by overuse.

Anyone using those terms for anything other than potato description will incur an £800 fine.

A government spokesman said: “We need to make the euphoria from this event last as long as possible because we can’t afford another Olympics.

“Therefore, we ask ordinary people to reserve the use of the R-word and the B-word for David Cameron’s exclusive use unless they’re in the market for Jersey Royals, baby potatoes or indeed King Edwards.

Chef Julian Cook said: “Does this include ‘king’ as in, ‘stinking’, ‘bollocking’ and ‘fucking’?

“If so that is unacceptable and will make communicating with my kitchen team virtually impossible.

“Diana would not have banned swearing, she was a woman of the people who understood cursing.”

The government spokesman said: Additionally, anyone who wishes to use the term parasite is only permitted to do so when discussing Leptinotarsa decemlineata, the Colorado potato weevil. 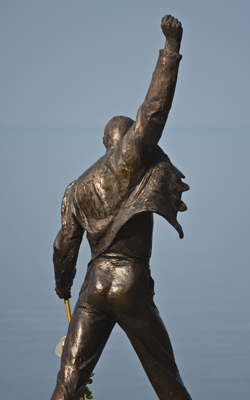 A NEW film of Freddie Mercurys life story will portray the rocker as straight.

Biopic Freddie: Rockin’ for Vagina portrays the singer as an average ‘lad’ who liked beer, birds and tinkering under the bonnet of his Ford Escort. Film industry sources are tipping either Jason Statham or Idris Elba for the title role.

Producer Stephen Malley said: The fact is that many people would prefer it if Freddie hadnt been gay.

Our Freddie is very much the sort of bloke youd find down the pub, chatting up the ladies and discussing Millwalls chances this season.

“He still does everything Freddie did, writing Bohemian Rhapsody and that incredible Live Aid performance, but he does it without showing any interest in mens arses.

Obviously Freddies death from AIDS-related illness presents a problem, but weve invented a new ailment for him to die from, rockstaritis, a fatal disease caused by being too famous.”

Malley plans to replace  elements of Mercurys life, such as his long-term male lover, visits to gay clubs and numerous public statements confirming he was gay, with a storyline about him missing his wife and children while on tour.

Mother-of-two Carolyn Ryan said: Its great to see someone setting the record straight. I love Queen but I dont like gays, so theres no way Freddie could have been gay.

Also if he was gay, how come he sang Fat Bottomed Girls and not Fat Bottomed Men? That just wouldnt make sense.