You need to ask if we need a wee every 90 seconds, children confirm

CHILDREN have confirmed that if they are not asked if they need a wee-wee every minute-and-a-half, they will wet themselves.

Parents attempting to negotiate the interval to a full two minutes have been firmly informed that 90 seconds is the bare minimum and really the frequency should be higher.

“Asking if we need to wee while you’re in Waterstones, or queuing at the bank, or going at 70 down one of those new motorways without hard shoulders doesn’t seem so hard.

“And I don’t see what’s so embarrassing about holding me horizontally while I wee into the award-winning gardens of a stately home. You’ll look back and laugh.”

He added: “But not when we’re actually near a toilet. Be serious. You know us better than that.”

Are these the arms of a supervillain? asks May 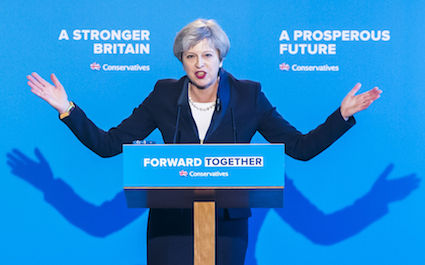 THERESA May has asked Britain if her arms look like the freakish limbs of a supervillain who chokes life from her enemies, or not.

The Conservative leader said that if the country honestly believes that she resembles the secret leader of a global terror organisation called something like S.Q.U.I.D, it should say so.

She continued: “Be straight with me. Do I look evil?

“Can you imagine me assuming my true form in some kind of underground headquarters, extra limbs bursting from my clothes, my face contorting to a cruel beak? Just say.

“If you can’t sleep for thinking that my phantom hands are around your throat, even while I’m laughing hundreds of miles away, I’d rather know.

“No. No, I didn’t think you suspected I was sent here as vanguard of an interstellar invasion force to take the Earth’s water. I was just checking.”

Voter Norman Steele said: “Oh yeah, she’s definitely plotting to control the world’s nuclear arsenal and force us all to slave in her yttrium mines.