A CANADIAN zoo has announced plans to construct a specialist nightclub for its homosexual animals.

The zoo, which is home to a male penguin couple and a bi-curious anteater, has begun construction work on a multi-species gay animal nightspot called AnimXS.

Head homosexual animal keeper Stephen Malley said: “It can be hard for gay animals to express themselves within the hetero-centric confines of the conventional cage or tank.

“AnimXS is a modernist three-floor structure where like-minded animals can meet, hang out and party to throbbing hard house.

“For creatures who want to further explore gay subculture, we have specially-fitted denim and leather wear. Komodo dragons look great in biker caps.

“Interested animals will be given a special key allowing them to escape their enclosure, dance through the night and then get home at dawn, without their social group being any the wiser.”

“And while I think this is a step in the right direction, I worry that AnimXS will perpetuate the stereotype of gay animals as being debauched night crawlers.

“For example I don’t think there should be something called a ‘fuck room’. And I certainly don’t think the public should be able to pay a pound to look through its thickened glass windows.”

French shocked by lack of shock 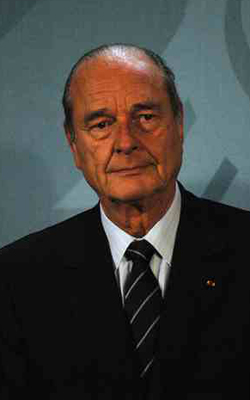 THE people of France have been left shocked by the complete absence of shock they feel at former president Jacques Chirac being found guilty of embezzlement.

As the sentence was announced, people across France lost the ability to shrug as the immense lack of surprise overpowered their neurological and musculoskeletal systems.

Helene Archer, an air traffic controller at Charles De Gaulle Airport said: “I find the idea of a French politician diverting money to his own friends and putting them into fake jobs so numbingly plausible that I couldn’t even be bothered to get up this morning and smash my car out of its parking spot.”

Parisian journalist/lover Julien Lambert said: “It is unbelievable how unsurprising it is that a former head of state should be thus convicted.

“This has not happened here since 1945 when Marshal Philippe Petain was found guilty of collaborating with the Nazis.

“Well at least we need never again fear a French leader climbing into bed with a domineering, power-hungry German regime.”

Professor Henry Brubaker of the Institute for Studies,said: “It is important to note that Monsieur Chirac will not serve time in a prison and this sends a powerful message to current politicians.

“It says after you lose the privilege of immunity, make sure you grow old in a rather endearing way, like a kind grandad whose pockets are perpetually stuffed with boiled sweets.

“Although Chirac would probably charge you for the Werthers and not declare the income.”