Brown To Have Union Jack Tattooed Across His Buttocks

PRIME Minister Gordon Brown is to have the union flag tattooed across his buttocks in a bid to rally the nation in the face of terror.

Brown wants Britain to look to the flag as a source of strength and believes his buttocks can bring "unity and a shared sense of purpose".

The Prime Minister said: "It is time to lead. Let my tattooed buttocks be your inspiration.

"Every time the terrorists threaten the values we hold dear, think of my raw, tender bumcheeks and what they represent."

Despite being terribly Scottish, Brown is a long-standing devotee of the flag and carries a very small Union Jack and miniature flagpole with him at all times.

One senior minister said: "Cabinet cannot start until Gordon has run his miniature flag up the miniature flagpole. Then we all have to stand and salute. It's a very different style of government."

The tattooist, Roy Hobbs from Bristol, said; "I tend to do a variety of celtic what-nots, or maybe the odd leaping panther.

"The Union Jack itself should be fairly straighforward. The unkown quantity is the size and consistency of the Prime Minister's buttocks."

"We will, of course, have to remove the existing tattoo which, for some reason, says 'hello sailor'."

James Blunt To Be Sacrificed In Spectacular Live Earth Finale 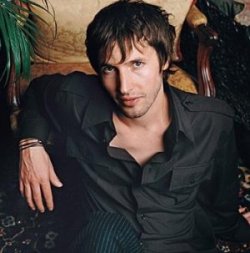 SINGER-songwriter James Blunt is to be sacrificed in a symbolic gesture of climate change solidarity at the end of this weekend's Live Earth spectacular.

Organisers believe an actual human sacrifice is the best way to raise awareness of the threats from global warming.

As he finishes what will be his last performance of You're Beautiful, Blunt will be tied-up and then placed on a large pile of sticks on the Wembley stage before being set alight by former vice-president Al Gore.

Simultaneously in Johannesburg Nelson Mandela will plant a symbolic row of brocolli to offset the carbon emissions from the smouldering pop star.

Event organiser Wayne Hayes said: "Live Earth is a wake-up call and what better way to shake people out of their complacency than by setting fire to James Blunt?

"There was a lot of debate over which performer should be sacrificed and there were some ferociously passionate advocates for the torching of Phil Collins.

"But when we actually looked at the list the name 'James Blunt' just popped right out."

The event, supported by Chevrolet, producer of gigantic, poisonous cars, starts on Saturday and is due to finish around 400 days later.

Organisers predict that Blunt will be one of many casualties as TV viewers throw themselves into the road rather than listen to Madonna talk about giraffes.