BRITAIN'S spies are demanding a 25% pay increase to prevent their wives having to work as whores.

According to Unison, the public service union, one in three spy wives is now forced to dress up as a concentration camp guard and beat hell out of a millionaire three times a week just to pay the electricity bill.

A Unison spokesman said: "We've got spies working two jobs, meanwhile their wives are on their backs getting a high-class seeing to and saving every penny to buy oil for their thigh-length boots.

"The MI5 director of counter intelligence works weekends at a BP station in Dunstable, while the head of our Damascus station is selling herbal remedies over the internet.

"And the next time you stop at a pedestrian crossing and some grubby little urchin tries to clean your windscreen, remember: that's probably the child of a spy trying to earn just enough so that mummy can put a new advert in Fat Jugs Weekly."

He added: "This is music to the ears of Osama Bin Laden who, by the way, has six wives who just sit around on velvet cushions all day flicking through catalogues.

"It shames Britain. Do you think Russian spy wives are on the game? CIA wives are hosting fancy dinner parties in Georgetown and hob-nobbing with senators, meanwhile our girls are taking a run up at Max Mosley's wrinkly backside."

Without Me You're Nothing, Queen Tells Happy Couple 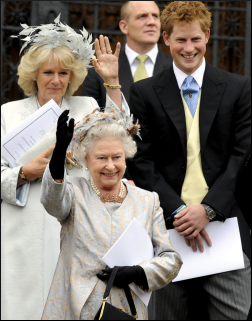 THE Queen has told newly married grandson Peter Philips to hand over at least 10% of his £500,000 fee from Hello! magazine.

The Monarch said it was only fair that she be allowed to 'wet her beak' in exchange for the international rights to her image.

A Buckingham Palace insider said: "The Queen took Peter and his new wife to one side and told them in terms which can only be described as brutally profane, that the half-mil from Hello! was thanks entirely to her.

"She told Peter he was 'six foot of broken condom' while his new bride was more common than her bog cleaner's bog cleaner.

"She said she had gone to the trouble of dressing up nice and turning out for the cameras and the least they could do was slide 50 grand her way."

Meanwhile Prince Harry has defended his decision to force two dozen cars off the road during a 100mph dash to his favourite London nightclub.

"His Royal Highness had agreed to throttle the first partridge and so he instructed his security team to terrorise a handful of small family cars onto the hard shoulder.

"These sorts of decisions are never taken lightly and we regret that so many people met firey deaths on the M4."

He added: "The party was a great success and the Prince enjoyed himself enormously."