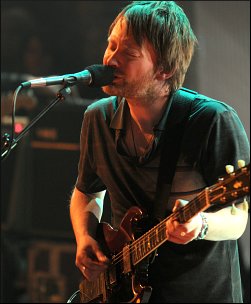 Singer Thom Yorke said having intercourse with six girls a night, all of whom had driven to the sex-party in their own car, was killing polar bears.

In future all band members would take turns with the best looking girl who had arrived on a bike, as long as she showered in between.

Yorke said: "If getting five people in the back of a limo isn't car sharing then I'd like to know what is.

"Ideally fans should walk to our gigs, though they will need to set off earlier otherwise they won't have time to buy a t-shirt."

He added: "Did you know Mick Jagger has two planes? One for him and one for his sex-groupies. That's a huge carbon fuckprint."

Yorke said the band was doing everything it could to minimise its impact on the environment, except stopping playing huge stadiums with electronically powered instruments.

He said: "We need to get the message over that climate change is killing our planet.

"What better way to do that than with dozens of huge amplifiers, multiple plasma screens and a laser show?"