Meeting where everyone is hungover goes incredibly well

A BUSINESS meeting where all participants were horribly hungover has gone amazingly well, attendees have confirmed.

The 10.30am meeting was attended by a business manager who was on the piss last night, three marketing managers who had spent Sunday drinking prosecco at barbecues, an HR executive who put away seven gins watching Love Island and a junior who boozed his way through an E comedown.

Ryan Whittaker said: “The first thing we did was turn the lights down and order a second round of coffees, then Dan began his very subdued presentation.

“He was slumped in a chair, clicking through slides without any of the usual bullshit, gesturing at graphs saying ‘Look, it’s going down. So that’s not good.’ Nobody wasted time with noisy questions.

“Sarah admitted we hadn’t sold it properly and promised quietly to fix it. Wes suggested we just copy the other campaign that worked rather than f**k about. Katie said she’d book that in this afternoon if she was allowed to go home after.

“Nobody launched into exhaustive self-praise. Nobody mentioned the brand journey or the growth narrative. The desire to get shit done with a minimum of fuss overrode all other considerations.

“It was frightningly efficient. Sometimes a thumping headache, shivering sweats and the overwhelming need to rest your head on your desk are all the motivation you need.” 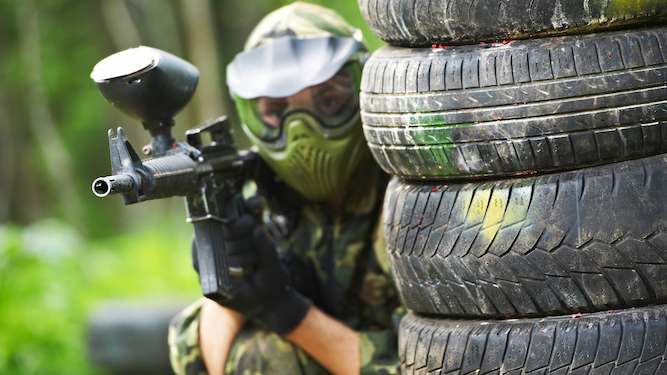 ‘SHOULD I keep Sancho in my fantasy football team?’ is just one of the questions puzzling dumbshit men across Britain today. A few other reasons why they’re worse:

Only men could be so desperate to fight in a war that they invent paintball, where you pay £130 to be shot. Running around breathless in scrubland off the M62 only to be cut down by three blokes with lives so empty they do this every weekend. That paint budget would’ve been better spent on a lovely Rectory Red Farrow & Ball undercoat for the living room.

If a man is staring at his phone, chances are he’s making last minute tweaks to his fantasy football team. It’s been a stressful week spent chasing Liverpool fan tweets for updates on Andy Robertson’s ankle. Pathetically he spent longer coming up with his funny team name than he spent choosing his girlfriends’s last five birthday gifts, combined.

Hen dos aren’t much better but the attendees tend not to return home with broken collarbones, no eyebrows and an STI. Women get a bit drunk, cackle and fall out. Men try to chokeslam a waiter through a table outside a Croatian nightclub in a disagreement over a forty kuna tip.

On paper men have this right. Naked ladies. Check. Access to booze. Check. But really this is an exercise in futility. Men paying £30 for two minutes of a woman they can’t touch gyrating in front of them, so drunk that the next day they can’t remember if she was a blonde or a brunette.

No-one can piss money up the wall like a man chasing his gambling losses. Why else do men flock to casinos at the end of a night out? And they all come out mumbling that yeah, over the course of fur hours they just about broke even. Meanwhile the casino had yet another fantastic night.