I have a reputation of being a ‘naughty man’.

Some say that playfully rubbing yourself up against your assistant Claudette whilst playing Sex Bomb by Tom Jones (my first choice of record) full blast is filthy, filthy, dirty and wrong. But believe me, women such as Claudette, they love the attention, especially when it is from a man of such considerable charm and status as myself – right up to the point where she hits me over the head with a candelabra and calls security. The little minx.

I’m a party guy – I love to party – but hey, who doesn’t? I once had a very nice party at my home. One moment I was offering the guests nibbles and threatening our Filipino maid with the sack if she dared say anything to my wife, the next I woke up in my hot tub with six members of the French women’s beach volleyball team. Then someone turned the stereo up and we all began doing the rowing dance to my second choice, Oops Upside Your Head, by the Gap Band.

While in jail I made a very nice friend called ‘Crossbow’. He has many fine tattoos and offered to lend me his radio. It was on this radio that I recently heard my third choice record, My Ding-a-Ling by Chuck Berry. I have many happy memories of this tune, for I used to play it in my office whenever I interviewed a fresh batch of interns. I do not think they liked Chuck Berry because the girls would pull a face like they were sucking a lemon, as I reclined voluptuously in my kimono. I have tried my very best to understand the opposite sex, but as the saying goes, men are from Mars and women are from Venus. The dirty little tartlets.

For my book I am choosing All The President’s Men. It is the true story of how a short, ugly president will go to any lengths to hang onto power, including burglary, cover-ups and paying African cleaning women to make-up terrible lies about sexy men.

My luxury would have to be a nice radio of my very own. My friends, if I have learned anything over the last few days it is never, ever borrow another man’s radio – especially from one who has not been anywhere near a beach volleyball team in 17 years.

Airlines crack down on fraudulent vegetarians 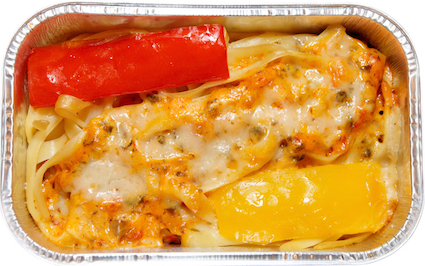 AIR passengers will have their in-flight meal choices stored on a database in a bid to catch fake vegetarians.

Airlines claim they are currently losing millions of pounds a year to bespoke meal fraud by deceitful carnivores.

A US Airlines spokesman said: “Meat eating passengers are ticking the vegetarian meal box when booking their ticket just because it makes them feel a bit special for a while.

“Others simply claim to be vegetarians during a flight so they will get their meal sooner or because, for some reason, they don’t like the look of the chicken.”

One airborne vegetarian admitted: “On the ground I would eat rare veal but I just don’t trust meat once you get it past 30,000 feet.

“Also, a lot of young women are vegetarian these days and I would like to have sex again.”