BOBBY MOORE 1 ENGLAND 0
Went round to Brian Clough’s to watch the England v Slovenia match the other day. Was planning to go to Don Revie’s but when we got there he was charging people twenty quid to get in and had put a ban on everyone bringing in their own drinks.

Apparently, the fucker was trying to flog off cans of Skol for a fiver a go. Plus there was compulsory bingo at half time. And he’s only got a black and white telly and he makes you take your shoes off at the door. Fuck that for a lark. So it was a no-brainer – off round to Cloughie’s instead.

It wasn’t a great match and Bobby Moore was bored shitless. He resorted to doing his party piece, which involves swallowing loads of jewellery and then regurgitating it back up. You haven’t died until you’ve seen England’s only World Cup-winning captain coughing up a bangle.

HAPPY DEATHDAY JACKO!
It’s Michael Jackson’s first deathday on Friday and he’s planning to celebrate it in style. He’s got a dozen unicorns to pull him around in a platinum chariot while he tosses After Eights wrapped in edible gold leaf to all and sundry.

Then, for the evening, he’s organised a star-studded party with special performing guest artists. Marvin Gaye and Otis Redding are going to have a fart-lighting contest, Anna Nicole Smith is promising ‘a vagina monologue with a twist’ and Wilfrid Brambell is going to play the spoons with his teeth out.

Jacko’s trying to persuade The Big Man to reach down and pull the Mir space station up here for a couple of hours so we can get the crew out, fuck about with them and then send them back. Only after wiping the short-term memory of all but one of them.

Next week I’ll bring you an exclusive from Jacko about how he really died….

NEW ARRIVAL OF THE WEEK
Some odd bloke with a papier mache head pitched up the other morning, going on about how his mum didn’t have anyone to do her shopping for her and that she’d have run out of chops by the end of the week. I think I’m in love.

Retirement Age Raised To Five Years After You Die 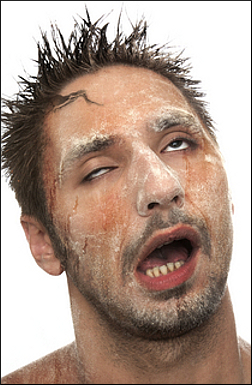 PEOPLE will be expected to work for a minimum of five years as a zombie under new government plans to raise the retirement age.

Funerals will include a compulsory back to work assessment and any corpse refusing to attend job interviews will have their supply of brains cut off.

Work and pensions secretary, Iain Duncan Smith, said: “From the fast food sector to Britain’s burgeoning call centre industry, there is a great untapped market for the shuffling undead.

“ASDA have already shown that it is possible to staff large premises with nothing but the denizens of the underworld.

“With these new measures we hope to finally remove the warming promise of death’s embrace that used to give so many a vague glimmer of hope.”

Exemptions will be made for those who died in explosions, plane crashes or catastrophic chainsaw failures but their body parts will have to be examined by a benefits officer to assess whether a retraining course could secure them a job at an IT helpdesk.

Nikki Hollis, who died eight months ago after trapping her head in an industrial steam press and is currently employed as a surly, useless bitch in B&Q, feels the zombie work scheme has given her a whole new outlook.

She said: “I dont know where the shelf brackets are, ask someone else. Oh and by the way, BRAAAAAAIIIINS!”