I'VE been lucky enough to meet stars of stage, screen and indeed, some of my biggest sporting heroes. But the one interview which touched me most was with the woman who provides the voice you hear in post office queues. I am talking, of course, about those famous words, 'cashier number five, please'. She was the most wonderful lady, answering all my questions with grace and a good deal of wit. Unlike that monosyllabic fuckstick, Meg Ryan.

Chat show guests come and go, but there are those whose charm and charisma so exceeds that of any mere mortal, I'm left with no other option than to invite them back on. One such individual was the mercurial Mr Billy Connolly, or the 'Big Yin' as he’s known to many. Billy has to be, without fear of contradiction, the funniest man it has been my pleasure to spend time with. Some people have an aura about them, a magnetism, that intangible 'x-factor', if you like, which draws people towards them – in short, Billy is one of those people who simply lights up a room. It's such a pity his missus is such a complete cunt.

There are many who tell me that when I come to the end of my run as a chat show host, that there will be a gaping void left in their lives. Some people say that they grew up watching me interview legends such as Muhammed Ali, Jimmy Stewart and of course the wonderful comedy actor and raconteur Mr Reginald Varney. Now most people remember Reg as the man who appeared in that great comedy classic from the early seventies, On The Buses, but what a lot of people never knew was that he had the most prodigious appetite for bestial porn and Angel Dust. Dear old Reg, the old goat-fucking wag.

Comic genius is a very rare, and I hasten to add, very precious commodity these days. One such performer I have come to admire over the years is a young lad who has taken the entertainment world by storm – I am talking, of course, about the remarkable and slightly tubby Peter Kay. I’ll never forget the first time he appeared on my show. He immediately went into this most marvellous routine which literally had me wetting my pants, about the time he went to the shops, bought a Texan Bar, some Black Jacks (luckily for me, my other guest Samuel L Jackson knew it was a penny chew), two packets of Spangles, all of which were washed down with a bottle of Panda Pops. Hilarious. If that wasn't enough, he then sent a by now hysterical audience into total apoplexy by singing the theme tune to The Six Million Dollar Man whilst running in slow motion – quite simply magical, I think you'll agree. A smashing lad, although he could do with losing a bit of weight.

I’ve been lucky over the years to have some of the most talented musicians to provide wonderful entertainment. I looked at the tapes of shows gone by and the names simply trip of the tongue: Mel Torme, Miss Peggy Lee, Tony Bennett, Peter and the Test Tube Babies, the King Singers, Kenny G, the BBC Radiophonic Workshop & Barbara Dickson, Slipknot, Mrs Mills, Rush, Dio, King Crimson, DMX vs Anita Harris – the list is endless. So who did I get to play me out on my last show? That ivory-tinkling, arse-wipe Jamie Cullum, that's who. 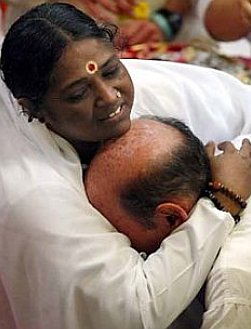 AMMA, the big fat indian woman who has hugged more than 26 million people, has warned Jonathan Ross not to come within 100 metres of her comforting bosom.

It is the first time in 30 years that Sri Mata Amritanandamayi, also known as Amma or 'mother', has refused to hug another human being, insisting the BBC chat show host 'stank of evil'.

The 'hugging saint' said: "Some souls are born for great tasks, other souls are humble but do great things. Jonathan Ross is a jumped-up researcher with a dirty mouth."

The Amma Foundation has now adapated its motto to read: "May all the beings in the all the worlds be happy – except Jonathan Ross."

She added: "The greatest tragedy in life is not death; the greatest tragedy takes place when our talents and capabilities are underutilized and allowed to rust while we are living. Or when the BBC gives £18 million of public money to a prick.

"If he was my child I would have thrown him into the River Pamba as an afternoon snack for the crocodiles."

The foundation's online shop has also started selling  t-shirts bearing the chat show host's face and the slogan: "If you see Jonathan Ross, kick him in the nuts."

Amma travels the world hugging anyone who comes forward, often uttering a few soft words of comfort to those most in need.

At her recent event in London she embraced the chancellor Alistair Darling and whispered: "You couldn't run a bath. For God's sake just resign."