Higgs Boson is a lot like 50 Shades of Grey A swirling mass of bondage fantasies

But in reality, there was no real eureka moment: searching for the Higgs is a long, dull affair which involves pouring laboriously through screeds and screeds of randomly placed scribbles and utterly tedious nonsense. In this sense, it is a lot like the best-selling novel, 50 Shades of Grey.

There are many shades of grey that physicists searched through on their hunt for the Higgs. Since the LHC switched on, they’ve been narrowing them down to find out exactly who Grey/Higgs is and what he wants from us. But he’s a sneaky little chap who dislikes having his photo taken and even denies his masculinity by pretending to be a particle he’s not. But because we’re dealing with the most miniscule subatomic particles known to man, we are pretty sure that he has really tiny nipples, probably has the smallest you’ve ever seen.

This particle drives me insane with his mind games and constant teasing. Someone needs to tell him the reason he’s a depraved mess who seeks to torment and exert control over all others – commanding the Bottom Quark to drive to the petrol station with no skirt on and giving the Tau Neutrino twenty quid to stick a can of Right Guard up itself –  is because he’s deeply insecure and living a lie.

You should count yourself lucky that there are brave men like me who’ll stop at nothing to catch the Higgs and pin him down. He’s a seriously disturbed tiny deviant who, given half a chance, will leave you covered in welts and stinking of CK One and urine.

The cause for celebration is that we’ve managed to corner Higgs between 25 and 26 shades of grey, (or, as some old-fashioned sticklers call them, ‘gigaelectronvolts’). But until I’ve nailed the brute, there can’t be a real fanfare at the LHC. Mark my words, though: his days are numbered. Not too long from now, anti climax will be a thing of the past and we’ll be no longer be dealing with speculation and rumour.

We’ll soon be able to announce to the world that Ryan Gosling will play the Higgs in the film version of Fifty Shades and if confirmed, life will cease to be the same. I’ll have discovered the reason for reality and there will be unadulterated joy in the press room at CERN: queues a half mile down the street, Professors Brian Cox and Steven Hawking leaping around doing chest bumps, high-fiving and kicking each other full force in the balls.

Peter Higgs was right: it’s nothing short of incredible that we’ll witness scenes like these in our lifetime.

Unemployed to have arses removed 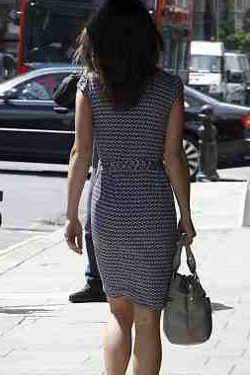 THE unemployed are to be forced ‘off their backsides’ by having their buttocks cut off, it has emerged. Work and pensions secretary Iain Duncan Smith believes the best way to get the jobless off their sofas is to ensure they have no arses to sit on.

He said: “The old-fashioned notion of ‘rumps for all’ is a luxury we can no longer afford. We need to make severe cuts, to the bone, in order to get ourselves back on our feet.”

Under Duncan Smith’s plans, anyone visiting a Job Centre Plus to sign on will be harangued into a special cupboard fitted with laser bum-scalpels.

The seared-off buttock tissue will be pulped and transformed into ‘government chicken bucket meals’, then sold back to working class families for £1.99 a go in a move that would further bolster the economy.

Company director Roy Hobbs said: “As much as I resent unemployed people’s over-attachment to their posteriors, we must remember that Britain’s economy is largely arse-based, unless we make call centre workers stand up all day at their desks.

“Actually that could work and I’d save a few quid on chairs.”

“Stephen Hester’s hefty arse cheeks could keep a family of six in gravy dinners for a month and he probably wouldn’t even notice they were missing.”