I AWOKE to see that Pippa Middleton has jetted off on holiday with her ex, just in time to distract everyone from the real news about her sister. It was like the wedding all over again and all the old tremors returned.

Without realising, I leapt into my car and drove all the way to the royal couple’s home town of Anglesey in Wales. I had to warn Kate or die trying. I lurched hopelessly through the streets of the barren townscape, trying every door but someone had locked them all. Kate was trapped.

Then, as if by magic, I happened upon the local Waitrose. I cried out in joy when I saw a fine head of long, brown hair gliding across the car park with the same royal flourish I’d seen recently on my TV. I approached from behind and reached out to touch that coveted royal mane, but recoiled at the last second when I noticed the split ends and weather-beaten toddler. This wasn’t Kate. In fact, it was obviously a local prostitute, probably lost on her way to Somerfield. Why was she lost? I suspect it was down to such street drugs as heroin and ‘whippets’.

Outside, my tears mingled with the rain, which dribbled from the clouds like urine from an indifferent deity’s underpants into a big, Welsh toilet. Who had done this to these people? Who could I turn to for help? Catherine Z? Dame Shirley B? Midge U?

“Gone! They’re all gone!” I sobbed at the sky as God turned his back.

Then it happened: out of the clouds a big chopper roared overhead and into the distance. God was right: there was only one way to lure the prince.  If I couldn’t save Kate, I could at least know exactly how it feels to be her, so I scaled a fire escape and threw myself from the roof of Waitrose. I cannot describe the gynaecological pain as my fall was broken by an incomprehensibly placed Welsh bollard. I lay on the ground moaning, drifting in and out of consciousness waiting for the prince to fly to my rescue. But all I saw was a balding man with his troll companion. “It got her, mother!” he gasped, gesturing at the bollard. “It got her right in the hairy biker…”

“I don’t speak Welsh” I murmured before passing into oblivion. When I next woke, I was in a hospital bed.  A member of the local constabulary was standing over me, raping me with his eyes. “Why did you do this to yourself, love?” he asked, intrusively. “Pippa,” I told him. “She pushed me. She’s jealous.”

I am not in the business of telling lies and sure, maybe Pippa didn’t push me.  But as I leave this hellish place clutching my course of cranberry and anti-inflammatories, I’m telling the truth when I say “She did push me, though”. How many more fatalities will it take? The prince can’t be there every time to save us. A pain I know only too well. 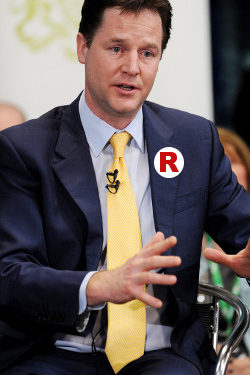 NICK Clegg restored his political authority today by threatening a revolt over the use of punctuation in the NHS reform bill. The deputy prime minister said the use of commas on pages 4, 18, 37 and 112 had left him ‘ideologically troubled’.

He has also demanded that health secretary Andrew Lansley remove at least 200 full stops while guaranteeing that there will be no cut to frontline curly brackets.

He said: “I met with Andrew Lansley yesterday and I told him in no uncertain terms that the proposed NHS regulator should have a capital ‘R’.

“I then looked him straight in the eye and said, ‘I warn you now sir, if you do not remove that semi-colon from page 17 I will bring this government crashing to the ground and to bloody hell with you and your rich friends’.

An ebullient Mr Clegg was then congratulated by his Lib Dem colleagues all of whom were wearing large badges emblazoned with the letter ‘R’.

Business secretary and coalition sceptic, Vince Cable, said: “I think the people who voted for us would rightly feel betrayed if we allowed important NHS-related words to go uncapitalised.

“This is a coalition of equal partners and I think that over the next few months you will see a lot more government punctuation being fiddled about with. Sometimes radically.”

Jane Thompson, an ecstatic Lib Dem voter from Peterborough, said: “This is more like it. Hopefully this victory will now lead to the reinstatement of the comma between the nine and the zeroes in ‘£9000 a year’.”