SO there I am setting up the stall, right, early doors, when who should amble over all casual-like but my old pal, Mr Marks and Sparks himself, Sir Stuart knobbing Rose. The total cock-fucker. Still I was glad it was him. I thought at first it might have been the Excise. Tossing fuck-tits.

Anyway, hes all hand made suit and silk tie. Very posh. None of that polyester shit like he knocks out himself up West. Nice schmutter, I says. Autograph is it? all coy like, and he nods, looking sheepish. Autograph my arse, says I. You lying tit arse sock banger. What do you think I am? Some kind of swivel-eyed shitting jock felcher?

Look Merv, he says. Me and the boys, the Selfridges, Peter Jones, even that demented Arab fuck at Harrods well, weve been talking and well… well, we think that interest rates are too high and all and that, well, you know its not good for any of us, is it? You neither, on the stall here, not good for business at all.

No fucking problemo, mate, I says. Ill get on the dog now, chew up Charlie Bean at the Bank and have a few points shaved off before you can fiddle. How low you want to go? And he says, all trusting like, oh I dont know, I reckon fifty should do it for now.

Fifty, I say, all slow and deliberate. Fifty. You seen the latest inflation report, you fucking cock holer? Im up to my piss flaps in petrol prices and gas bills and you want fifty basis off? Ive got the mad jocko on the phone every 15 minutes telling me to fucking uncrunch some credits or hes going to string me up by my knob from the Monument and you want me to open my arse and let you pump it just because no tart in Britain wants to be seen dead in a pair of your minge mufflers anymore? You fucking fuck-butter. Fuck right off.

So then hes givin it all, Merv, Merv, its not just me, its the whole market thats off, everyones suffering, even that mad kike Green at Bhs. In fact the only ones coining any shilling at all, he says, is those ponces at Waitrose, and thats only because they dont mind selling to the gays.

Any road up, better get myself spruced. Speaking to a load of bankers at the Mansion House tonight. Cock-mingers. 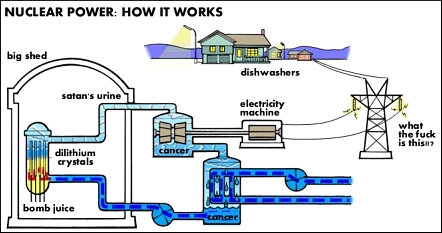 BRITAIN is to build a new generation of nuclear power stations after consumers said their love of dishwashers outweighed their fear of cancer and four-headed babies.

Concerns that building 20 giant bombs which could at any moment melt down and burn through to the earth's core sending the planet spinning off its axis and destroying the entire human race were set aside after it emerged that without nuclear stations there would be no Sky+.

And fears that large parts of the country could be turned into irradiated no-go areas populated by giant, flesh-eating rabbits which glowed in the dark were countered when it was revealed that without nuclear we would all have to eat Russian gas.

Wayne Hayes, a house-husband from East Lothian, said: "I'd rather have cancer of the balls than wash another dish. There's always just one more fucking fork in the bottom of the sink."

Nikki Hollis, 26, said she was worried about she would power her hair straighteners, iPod, second iPod and vibrating egg.

She added: "Without nuclear, it's hard to see how we can avoid descending into savagery."

Environmental campaigners said they too were dropping their opposition to nuclear power on the grounds it was clean, reliable and 'ever so French'.

Holly Trumbull of Greenpeace said: "Nuclear power makes you stylish, thin and looks upon affairs within marriage as an adventure. Vive la deformité."