My first week on the road finds me in Sydney, which is a bit like London, only with more sun and fewer Australians.

It also has more gay bars than any other city in the whole world so it’s a shame that I’m here on a hetero mission to see the totally amazing DJ Rico Henderson. And also to learn all about Australian culture.

I'm staying in the Kings Cross area, which is made up of brothels and backpacker hostels. But the good news is: They sell wacky backy in the sex shops so I got a fifty dollar bag to keep for when I see DJ Rico after his set this evening.

Our connection was so spiritual on the night we spent together after his London show last week, so I'm really looking forward to getting totally out of our nuts on Kings Cross hydroponic. DJ Rico is a complete drugs connoisseur.

"Me too!" I told him. "I've taken, like, every drug you can think of under the sun! If you can name it, I've taken it and probably even been hospitalised!" He asked me if I'd ever taken heroin. "No," I told him. "But that doesn't count, does it? It's not a real drug, like cocaine. I was totally bing-bonged on that shit!" Rico agreed with me that coke was great. We are like soul mates. I think he has to take so many drugs to temper his profound musical intelligence. It must be hell for him to have so much creativity rushing around his head. Anyway, I am definitely going to take cocaine again the next chance I get.

After Kings Cross, I went to the Sydney Opera House, which was a bit of a let down to be honest. It just looked like it does on postcards. Plus, I don't really like opera. I like deep house and German Techno. Some say that classical composers were the DJs of their day, but I'd like to see Mozart trying to match up his beats the way DJ Rico does when he's spinning a blinding set!

On the steps, I met a local girl, whose Dad was Chinese – and gay! I wish my dad was cool like that instead of being into Chris Rea.  She had even heard of DJ Rico and when I told her about our night together, she said, "No way!" I corrected her: "Yes way! So hands off!"(Joke!). She was so funny.

I really feel like I understand the Sydney psyche now, with their big opera house and gay Chinese dads. They are people who love music and say 'Let's have kids and be gay!' It's this joie-de-vivre that really sets the Sydney folks apart from the rest of the world, and totally makes up for their accents, which are a bit nasal.

Everyone Now A F*cking Tennis Expert 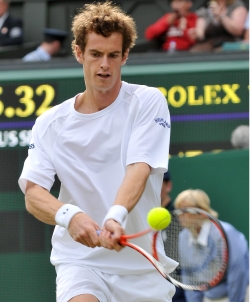 EVERYONE in Britain is now a fucking tennis expert who could easily replace Dan Maskell, or whoever it is that does the commentary these days.

Following Andy Murray's near defeat by a Frenchman, everyone is saying how much his ground-strokes have improved and that having a girlfriend is obviously really good for his temperament.

Wayne Hayes, from London, said: "His unreliable second serve really came good in the fourth set. He's totally getting his end away.

"And did you see him eat a banana? Amazing. Apparently it gives him a potassium boost and stops him from thinking about bananas while he's playing."

But everyone is also warning that Murray now faces the match of his life against that scary looking Spanish guy who is really good with clay and needs a haircut.

Hayes added: "The Spanish guy is really strong and scary, but he doesn't like grass. And neither do I to be honest. It tastes awful."

Sandra McKay, a housewife from Reading, said: "What about that crowd? It's the crowd though isn't it. The crowd, yes, it's all about the crowd."

"With Sharapova and Ivanovic both failing to find their form it means the title will now go to some big ugly lesbian."