LAST week, Madonna celebrated her 52nd birthday in lavish style. But the celebrations were eclipsed by coming of age of a totally different kind in the form of Lourdes, her 13 year old daughter.

Yes, it’s the day everyone’s been waiting for with a sense of grotesque inevitability: Lourdes has finally set to work on those eyebrows. We’ve watched for years now as the Queen of Pop’s daughter was showcased around glitzy bashes in a series of ever shrinking miniskirts which seemed to correlate directly with the unstoppable spread in feral, Latin-inspired facial decoration. And now we’re all asking ourselves: is 13 too young to tweeze? I suppose the answer should be ‘no’ if you’re Hispanic or something along those lines, but surely ‘yes’ if you’re just normal.

Of course, mother and daughter sported crucifixes a la Madge in the 1980s. But really, this is just for show as Madonna converted to Voodoo Jewishness years ago. These days she doesn’t even believe that Jesus is the son of God and if she saw him near her house would probably wrestle him to the floor with her muscular limbs and then nail him to her garage door. But what can you do when you’ve already named your daughter after the most famous Catholic shrine ever invented? Imagine if Morrissey had a baby called Steakbake – he’d have to turn up to the child’s birthday parties wearing a little sausage roll around his neck.

Anyway, good luck to Madonna in her advancing years. If smokers can live to 103 then so can tarts.

What about Must be the Music, Sky’s answer to the X Factor? I’m never one to racially stereotype but this show is being dragged down by the crass, street vulgarity of a certain judge. That kind of slurred ranting might be okay when directed at the greyhounds at your local track, Miss Spiteri, but in my living room it’s just invasive and traumatic. A My Fair Lady-type spin-off show would easily double ratings. We’ll civilise the brute yet!

How exciting that now PM Dave’s on his Cornish retreat, we’re all in the dainty hands of Nick Clegg Esquire! With his milky white thighs, curving smile and pretty nose, he is living proof that Pride marches can make a difference.

Cheryl Soldiers On Despite Being Dead 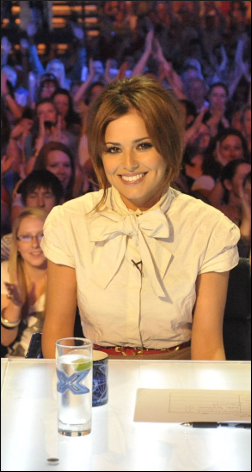 BRAVE X Factor judge Cheryl Cole has overcome her recent death with the aid of hooks and pulleys.

Producers said the plucky Girls Aloud star would have wanted to honour her commitment to the show and had always insisted that being dead would not prevent her from doing her job.

A spokesman said: “She had a vacant expression on her face, which obviously failed to ring any alarm bells. But then we noticed she hadn’t moved for about 19 hours and that’s when Simon decided to jab her in the thigh with a big fork.”

The production team quickly agreed the deceased singer would triumph over her deadness with the aid of almost-invisible wires, Hellraiser-esque hooks and a team of enthusiastic puppeteers.

The spokesman added: “X Factor is all about people overcoming adversity in pursuit of their goals, whether you’re a thickset virgin with cheap shoes and hedgerow pubes or a recently deceased corpse.”

Audience member Tom Logan said: “Cheryl did brilliantly, you could scarcely tell anything was wrong, though her head did keep lolling back and forward until they got the hang of it.

“‘Being dead did not affect her repertoire of one facial expression – the slightly concerned aspect of a five-year-old who’s just licked a cat’s ear for the first time and isn’t sure if it tastes good or bad.”

Logan’s wife Jane added: “She was fantastic, though there was a slight smell of physical degeneration and a few more flies than one would ordinarily expect.”