One Woman's Week: Black To Basics

WHEN people ask me, ‘Karen! Been watching the World Cup?’, I always respond, ‘World Cup? World Crap more like!’. Normally, Wimbledon is the only sporting date in my summer diary. For me, football has always been something played by faceless alcoholics with clammy thighs and impenetrable regional accents.

But now it seems footballers are keen to show us their unique personalities and outrageous tattoos and I’m sure it wonâ€™t be long before they’re as massive as the tennis legends – stuffing tennis balls into their boxers or rocking up in specially customised slut rags. There is a whole world of footballing personalities out there: from the brawny Wayne Rooney, who showcases his dramatic side in adverts, to the sensitive buffoon, Robert Green who clearly feels awful about scoring that own goal.

Then, there are the Brazilians who would probably all be buying their dinner at the landfill if it wasn’t for my many clothes donations to Oxfam – so for that Iâ€™m thankful. And the Italians are just so sexy – it’s a crying shame they’re all gay. I long for the day straight men will also want to shave their thighs but I fear it’s a long way off. Wish I was a fly on the wall for all the slippery man-frottage that goes on in the post match showers with team Italia! Seriously though, they better watch they don’t get AIDS.

Speaking of which, the BBC have also included several moving pieces on Africa and offered us pensive responses from the likes of Gary Lineker. Gary et al really love Africa and are constantly having a right chortle about the exuberance of the locals.  I find it really moving that they’re including black commentators on every panel just to show how far we’ve come. But let’s face facts – they’re too scared to say it so I’ll just come out and say it: exuberance means black. There! How many more times will they call a vuvuzela exuberant? Sheesh! I think ethnic commentators like Robbie Earle should revel in their blackness and embrace full traditional dress for their TV appearances. Hiding behind a shirt and tie doesn’t make the problem go away, guys.

The message I’ll be taking from this World Cup, regardless of who wins, is: we all need to black up once in a while to remember who we really are.

Just as I predicted, it seems Mr Fox is not as Fantastic as everyone thought. Not only are these little orange, bin-guzzling bastards starting to show their true side, the film is totally shit: you don’t see Clooney in it once and the animation is far inferior to Pixar’s Wall-E.

I can’t believe what spoil sports the Pakistani government are for arresting the intrepid assassin who got caught on the trail of Bin Ladin. James Bond never would have got flung in jail – it’s discrimination.  Just because someone isn’t as dishy as Daniel Craig doesn’t mean you just take all their rocket launchers and bibles off them. 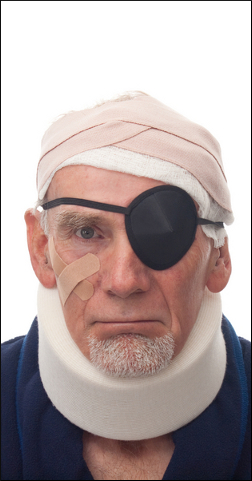 POWERFUL light sabres sold online could be lethal but are nevertheless amazing, according to experts.

The Institute for Studies conducted exhaustive tests on the weapon, which utilises a potent laser capable of burning through human flesh.

Professor Henry Brubaker said: “The sabre fires a beam 1,000 times stronger than a standard laser pointer, and is easily capable of permanently blinding a child. It also makes the exact same sort of ‘wooooob’ sound as the ones in Star Wars.

“We used the lab environment to reconstruct a potentially deadly light sabre duel. For reasons of procedural expediency I was Darth Vader and my colleague Professor Malley was Obi-Wan.

“After a flurry of blows I cornered the ageing Jedi master, uttering the immortal line ‘Your powers are weak, old man’, before administering the coup de grace across his buttocks.”

Professor Stephen Malley said: “It really fucking hurt. Certainly at the time I felt convinced that this type of device should not be available to the general public.

“However I changed my mind later on when I ambushed Henry in the canteen and swiped him across the back of the neck with my own blue beam of death. He sort of collapsed, and was just rolling around on the floor, screaming like the little bitch that he is.

“I stood over him and said ‘Join me, together we can rule the galaxy’ in a deep voice, and everyone cracked up. He was properly crying.”

He added: “On a more serious note, this is an incredibly potent weapon capable of causing irreversible physical harm.

“I recommend that it be banned forthwith, although mainly because I like the idea of being the only person who’s got one. The last Jedi, if you will.”

But Professor Brubaker was more equivocal: “I guess it’s like all these things, it’s alright if you’re not too much of a prick. So probably the light sabres should be labelled ‘NOT FOR SALE TO PRICKS’.

“Then it would be okay.”