One Woman's Week: Every Little Does Not Help

There's nothing I like better during a raging blizzard than working on my ultra post-modernist screenplay for Channel 4 or challenging my brain with a round of Trivial Pursuit with Donny. Obviously, the 'Pursuit' is not much of a challenge as Donny can't really be considered a serious opponent for someone of my calibre. But at least he tries!

So I was disgusted when my lay-about sister used the cover of snow, not to learn about ultra post-modernism, but to get pregnant – to a bouncer. I'm not judging anyone: before me and Donny got together, I snogged the bouncer from that exclusive city haunt, All Bar One (his name was Maxim and he was also a part-time body model for Reebok). But my sister's latest victim is no Maxim from Reebok: it's the doorman from Tesco Metro. I would laugh if it wasn't all so nauseatingly vile.

What's more it's a flagrant case of Sex Before Marriage. It's true, Donny and I have sex and that I drive men wild, even though I'm not married. But, it's okay for me to do it because God knows I'm sensible. It's like the whole Garden of Eden, Forbidden Fruit thing. This is what God tells stupid people to stop them from ruining their lives. The real story he reserves for Catholics who don't have a mental age of six. People like me and Tony Blair.

So on top of having to apologise profusely to the Lord on my sister's behalf, I'll also have to listen to her whinge about 'morning sickness' and 'labour pains'. And I suspect that during the birth I will be forced to punch my sister in the face when she starts bleating on about morphine. It's not that I don't sympathise – I've endured these agonies already, what with my nightmarish period pains – but if I can put a brave face on that, I don't see why I should have to give up my comfy seat on the train to some bloated skank.

It shames me to say it but it's the irresponsible lustings of bouncer junkies like my sister, flashing their knockers at Tesco Metro imbeciles, that are filling our classrooms to the rafters with the same grubby little dimwits who will ejaculate their way to fatherhood before they're tall enough to reach a pub condom dispenser. Britain – it really is broken you know. 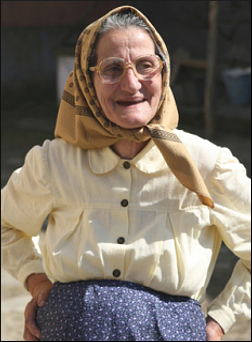 The £14m signing has revealed how he misses walking down a street and being accosted by dozens of bearded old women wrapped in shawls.

Pavlyuchenko said: "They cackle, they shake baby in face. In London, is not so much. Except maybe on underground.

"I come to England in hope of better life. But where is brutalist architecture, apart from Coventry? When will wind chill reach minus 40? And how I find man who poke dancing bear with sharp wooden stick?"

"And training ground is so smooth and flat. Where tractor ruts? Where drums full of industrial waste? Where deformed nuclear sheep?"

Pavyluchenko said settling into the English way of life had been difficult, particularly as he has been forced to spend much of his spare time teaching Andy Gray and Mark Lawrenson how to pronounce his name.

Spurs boss Harry Redknapp admitted many of his new signings were finding it difficult to acclimatise, adding: "We have to keep stealing things from Robbie Keane and then selling them back to him in the pub.

"And since moving from Man Utd Fraizer Campbell has found it very difficult to get used to that whole 'being in a team that could get relegated' thing."