One Woman’s Week: The Age Of Reason

I MUST admit I am becoming steadily more bamboozled by British society. Whatever happened to the veneration in which we once held our monarchy? In days of yore, people had a much better sense of humour and any decent citizen would have let a tiny spot of racist horseplay slide. And if they were to take offence at the monarchy, they would be severely punished – just look at bonfire night. And Ireland.

I really don't understand what the goddamn problem is here: Prince Harry hasn't done anything wrong. I mean, he said 'Paki friend' not 'Paki bastard'. You see, there is so much about intonation that people just don't understand. Because I am a highly skilled educator, accustomed to using language on a daily basis, I undertand that it is not the words we use, but the way we combine them, that generates meaning. I should really write a book.

I'll try to explain it a little: I have a friend, Stacey, who thinks it's just hilarious when I say things like 'Oh, get away you silly Chink!' and she's not even Chinese: she's from Ecuador! I've also got a friend, Mikey, who's gay, and he just loves it when I say to him 'Hey, Mikey! Where are you off to, you big fucking bum-bandit?'. But, the intricacies of language come in to play when I want to combine my nicknames. So, for example, while it's okay for Harry to say 'There's my Paki friend, Ahmed', if he were to say 'There's that gay Paki, Ahmed', it wouldn't sit so well. And saying 'There's that silly fucking Paki bum-bandit, Ahmed' is completely out of the question. It's just offensive. Luckily, there don't seem to be that many gay Pakistanis around so this is unlikely to ever be a problem.

I think it's criminal that we're persecuting poor Harry, who is out there fighting for our freedom in Afghanistan. I must admit, I did become aroused when I saw him waving his big machete around and smoking on TV. My boyfriend Donny, with his two week old beard and torn jeans, could only dream of smoking exotic cigarettes and brandishing knives with such finesse.  The real skill, so expertly displayed by Harry, is to talk and smoke at the same time. If Donny tried that, he would look like a twat and then set his beard on fire.

I think it's about time we got our priorities right and brought back the charge of treason, thus creating a new era of respect for our long-neglected royals. It would be called 'The Age of Reason’. Those responsible for the witch-hunt against Harry could then be tried and executed without any fuss. At the very least, on a point of principle, they would certainly be banned from their local bonfire nights.

Kaka Deal Off After Agent Finally Says The Word ‘City’ 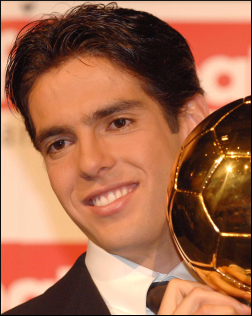 BRAZILIAN superstar Kaká has called off a move to Manchester after his agent finally said the word 'city'. The AC Milan striker was furious claiming he had been duped into believing he was going to sign for a proper football team that had won a major trophy since he was born.

Kaká said last night: "My agent called last week and said that Manchester were interested in me. I was so excited at the thought of all those great players, the traditions, the best coach in the world, and of course Gemma Atkinson's magnificent charlies.

"I packed an overnight bag and we went to the airport, but as we were walking through the terminal my agent turned to me and said 'oh, in case I didn't mention, it's Manchester City.

"I stopped dead in my tracks and said, 'are you having a laugh? Seriously, is this some big fucking joke?'.

"He said to me, 'don't worry, they're a really big club with loads of money. And then there's Mark Hughes'.

He added: "I walked away shouting, 'go and get me a proper deal from a proper English club that does not include the word 'city'. No Hulls, no Birminghams, and no fucking Stokes!'"

Manchester City said last night they still hoped to complete the deal if they can persuade Cristiano Ronaldo to sign for the club and act as Kaká's butler.