EVER seen a happy person get cancer? Exactly. Illness cannot exist in a human that is thinking happy thoughts. It’s important to constantly think positively or you could find yourself with a disease on your hands.

I remember a time when I’d been on a month-long ‘nightlife’ tour of Thailand after several successful companies I had advised used my integrated business process to float on the stock market.

In just three days I’d made over a million dollars and embarked on drenching my soul in the finest malt whiskies and champagne Cognacs. But in my crazy haze I slipped a disc hopping out of a jacuzzi in Koh Samui, meanwhile my haemorrhoids had gotten so bad I couldnâ€™t even sit on a bar stool without the aid of a rubber donut. I had reached a nadir.

I was getting some pretty heavy abuse from the other guys for being a crying pussy man, but through positive thought I banished every bit of anguish from my body simply by imagining how a young Nick Faldo felt after winning the Masters in ’89. The pain, the paranoia and the violent piles vanished almost instantaneously.

But I wouldn’t truly realise the full force of positive thinking until a year later when my latest girlfriend woke up one morning with a growth on her lip. “Thereâ€™s a bit of chocolate on your lip,” I said. “It’s not chocolate, it’s attached, what is it Morris?” she asked. Naturally she was panicking, but as I looked closer I could see it had hairs coming out of it too. God knows what it was but I immediately demanded: “Are you thinking negatively?” She lowered her eyes and replied: “Yes I am.” “I thought so because it’s getting bigger. It’s literally growing out of your face like an angry hirsute worm that may also be a mole.”

I had to switch her mind to something positive so I told her there was a good chance that this relationship could go to the next level and 10 minutes later it dropped off. I put it in a Ziplock bag and tossed it out of my car window somewhere on the A12.

So remember: negative thoughts are not only as powerful as positive ones they are in fact the cause of despair, all unsuccessful advances of the sexual nature and even sub-standard bunker shots.

I want you to stop thinking about anything negative, you must run up to the next person you see shouting: “I only think happy thoughts!” and then watch in quiet satisfaction as your unsightly moles fly onto their sad, un-Faldo-like faces. 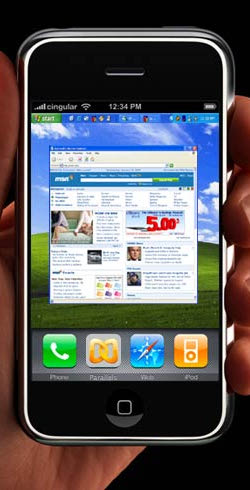 MILLIONS of iPhone users were totally told off by their boss after their favourite toy in the whole world forgot to get them up for work.

A software bug affected the rectangular nipple’s ability to effectively parent its charges, leaving them vulnerable to self-reliance for the first time since 2007.

Many were found by family and friends rocking in a foetal position and asking when phone was going to wake-up.

Martin Bishop, a 37 year-old Manchester United fan and Transformers enthusiast, said: “It’s just like the time I got evicted because it didn’t tell me to pay my mortgage. I’d call social services if I could get a signal.”

As Apple engineers focused on fixing the latest glitch in the Â£600 calculator, the company pledged to keep its stores open round the clock, offering advice on whether to eat vegetables and how to sit up properly like a big boy.

Specially trained counsellors will also be on hand to assure customers their phones still love them and do not want to touch them in the bad place.

Bishop added: “I got to work at ten-thirty and my boss was all like ‘what time do you call this?’ and I was like holding my phone up saying ‘ask him‘ and my boss was like ‘well, all this cardio-thoracic surgery still needs doing’.”

Meanwhile Apple has apologised for the phoney-woney boo-boo and insisted it would not affect its new OSX-powered toilet roll holder that knows when you’ve finished doing potty.