Dear Donna: I made a mistake at work and had to get married

I’m a successful man in his 50s who recently married his girlfriend, but only because work made me.

I got involved with her because she met my deep emotional need to boff anything female. My wife and I had been having difficulties already because I’m always doing that kind of thing.

But, due to an unusual condition of my employment, I have now had to marry the girlfriend or get fired.

It’s fine, she’s quite young and blonde, but all her dolphin-hugging mates are a bit off-putting, she blows tens of thousands on bullshit and she’s suggested we go vegan three days a week. I just wanted to get my hole.

Usually I end relationships by amicably not returning their calls and shagging someone else, but again, work makes this impossible. Any advice?

Donna replies: I admit I’m confused. As a rule it’s best to admit to errors at work rather than get married. I’m not even sure how that can happen.

And the way you describe your new bride gives me cause for concern. It’s almost as if you only see other people in terms of how they benefit you.

Anyway, you mentioned that you’re terrible at your job and the pay is shit, so it sounds like it’s best all round if you simply leave. That should solve everyone’s problems. 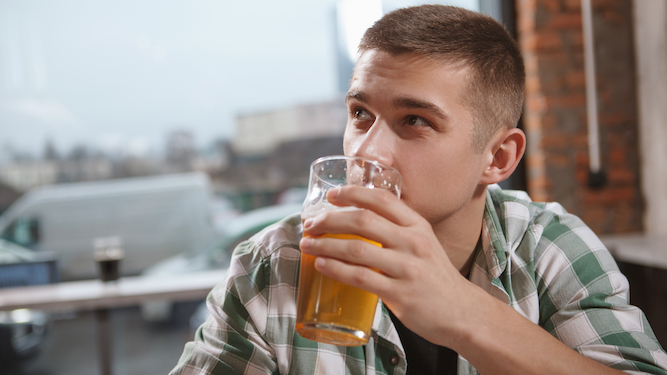 A MAN taking the edge off the bank holiday heatwave by drinking pint after pint of refreshing cold lager cannot imagine how it could backfire.

Jordan Gardner walked into town to pick up a few things, got a bit hot and sweaty, and is currently halfway down his third frosty pint while still believing this to be a great idea.

He said: “On scorching days like this it’s important to stay hydrated, which is why I’m playing it safe by knocking back litres of crisp, yeasty syrup like it’s going out of fashion. It’s the responsible thing to do.

“I also skipped breakfast, which I think is helping my body feel the benefits of this nectar as soon as possible. And judging by the effervescent sensation in my guts, I think it’s already starting to kick in.

“If I keep up a steady pace I should maintain a low body temperature. I’ve done this before so I know what I’m doing, although I can’t remember how that panned out. Drawing a blank for some reason.”

Barmaid Donna Sheridan said: “Yeah, he’s back, just like at Easter. Two more pints and we’ll turf him out. Wonder if he’ll make it home before he shits himself?”