How old will you be when you see your first Brexit benefit?

FIVE years after the referendum and a year after Brexit, Jacob Rees-Mogg is searching for any possible benefits. So if you’re 20 now, how old will you be when it starts paying off?

2024 Brexit has been a slow puncture to the UK economy since 2020, but before the election the government announces every full English will now, by law, have a little Union Jack planted in it. Take that, Remoaners.

2030 You’re now 28. Import and export are still a problem so you take a minimum wage admin job filling out identical customs forms every day so lorries full of jam can get to Calais.

2035 Britain has been out of the EU 13 years, and its citizens are still celebrating freedoms like not having to eat raw frog and children not being forcibly taught to yodel. However these are not benefits per se.

2046 You hit middle age without reaping any tangible benefits, but to celebrate three decades of sovereignity the government bans all foreign words. Quiche lorraine is now ‘savoury bacon cake’ and baguettes are ‘English long bread’.

2049 Britain is a low-wage, deregulated economy and foreign travel is unaffordable and discouraged. During your seven days annual holiday a year, which you spend in Skegness with the kids collecting exotic turds that have washed up on the beach.

2052 Your 50th birthday is a muted celebration. Every town centre is as empty and rundown as modern-day Nuneaton and every delivery driver is a miserable Brit. You queue for an hour to buy carrot wine at the supermarket because no one understands the pre-decimal currency brought back last year.

2085 Now retired, you listen to the radio a lot. Brexiters are still proud that kippers no longer require a refrigerated pillow to be posted. You’ve never posted a kipper, but now you wish you had.

2102 A Brexit benefit has materialised! Out of necessity, Britain has developed its own satsuma industry. Unfortunately you died yesterday. 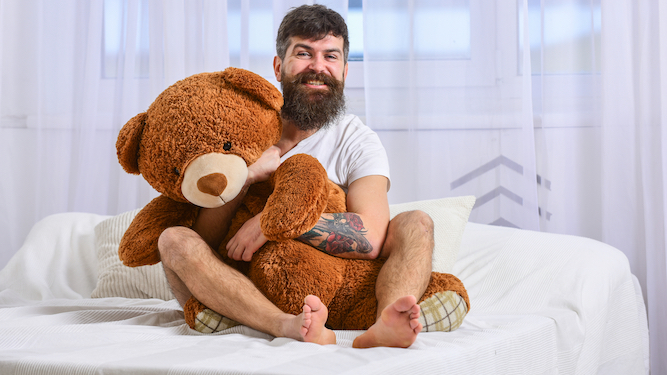 A MAN who bought a five-foot tall teddy bear for a date who stood him up plans to take it home and f**k it, he has confirmed.

Nathan Muir bought the excessively large bear as a statement of Valentine’s love, but after 45 minutes waiting for his date to arrive is prepared to use it to slake his Valentine’s lust.

“I’ve had to pay a deposit on the restaurant, so I’m not missing that. Me and Valentino here will be having our romantic dinner for two with pink champagne and chocolate-dipped cherries.

“Then I’ll take him home – I’m not under any illusions this bear is a woman, don’t worry – and put on my Nate’s Sexy Tunes playlist while cracking a bottle of prosecco. A £15 bottle too, the good stuff.

“And once we’re both in the mood I plan to waltz him into the bedroom, remove his ‘Be My Valentine’ T-shirt, bend him over the bed and give him a right good seeing-to. Why not? I’ve taken the Viagra.”

Date Grace Wood-Morris said: “I saw him from a distance with that bear and I just couldn’t. I couldn’t. If he’s that desperate he can take the bear home and f**k it.”