Blair to die for our sins

TONY Blair has opened his arms wide and announced his readiness to die for the sins of ignorant Brexit voters.

The former prime minister tore open his shirt and exposed his naked chest to the media after admitting he was so opposed to Brexit he would happily lose his life for his beliefs.

He said: “Brexit is wrong and should be reversed. There. I said it. Kill me now.

“Speak not of my former arrogance which arguably caused an increase in Islamic terrorism and cemented distrust of all politicians, because it is not helpful right now.

“Instead let me suffer for your misguided vote. Let me say for you the forbidden things: Leave lied, immigration is healthy, this will cost more than you’re prepared to pay.

“Aah, heresy! Strike me down with your arrows, with your swords! But know I die for Remain, and in my martyrdom millions will unite behind my memory and our cause will triumph.”

Norman Steele of Gateshead said: “Blair dead or Brexit? Wow. He always did know how to make you face tough choices.”

Piss-eyed Tango monster demands everyone say nice things about it 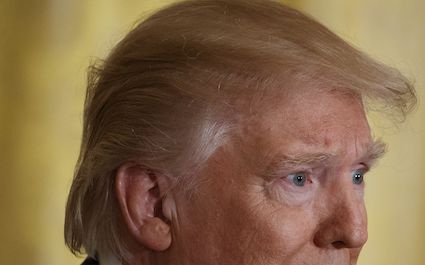 A DESPERATE, blithering fuck-up has demanded the media accurately report how unbelievably fantastic it is.

The unnaturally fluorescent mass of insecurities, apparently incapable of understanding basic logic, told press that the real story was how incredible it was and how much everyone loved it.

The thing, which blankly opened and closed a hole in its face even when not speaking as if in an autonomous feeding reflex, was able to respond to human speech but experts believe it is simply mimicry, devoid of meaning.

BBC reporter Julian Cook said: “It appeared to answer questions, but when you read back the answers they’re nothing but a torrent of unconnected words mixed with a keening refrain of pathetic self-praise.

“We believe this creature actually feeds on adulation and has adapted to seek out high concentrations of it, but instead is now exposed to unprecedented levels of toxic criticism causing it to lash out.”

He added: “Its neediness is almost to be pitied, if it wasn’t such a contemptible sack of orange shit.”