DAVID Cameron is finally realising he only became prime minister because Britain could not stand another second of Gordon Brown.

With three polls showing Labour in the lead, Cameron has accepted he has no political appeal other than coinciding accidentally with the strange, brooding Scotsman.

A Tory source said: “At first he was upset, what with the economy doing marginally better and Ed Miliband being just as weird as Brown, but without the tendency for extreme violence.

“But then he realised he should never have been prime minister in the first place. If Alan Johnson or the slightly less unusual Miliband had forced Brown to resign, David would have been just another arse who led the Tory party for a while.”

The source added: “There’s still a chance we can hang on, particularly as from now on the campaign will just be gigantic images of Ed Balls’ unbearable face.

Meanwhile, Ed Miliband has accepted Britain is going to make him prime minister in exchange for not being David Cameron.

Everything in world has been made into a musical 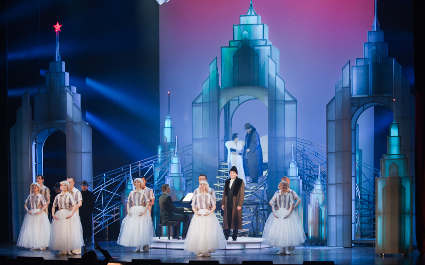 THE West End is set to close after the last original topic for a musical was made into a musical, producers have confirmed.

The history of musical theatre has seen every subject available, from the life of Jesus to the Vietnam war, turned into a two-hour spectacle with hummable songs.

Producer Helen Archer said: “We should have realised in the 1970s, when we made a musical out of the life of an Argentine dictator’s widow.

“But it really struck home last week when I began auditions for Cesar the Dogfood Musical.

“I briefly considered making a musical about the impossibility of making an original musical, with songs including It’s Over and Nothing Left To Romanticise but then Musical Dead At Scene! The End Of The West End opened to rave reviews at the Aldwych.”

West End theatres will close their doors in October for three years, by which time producers hope enough material will have accumulated to be strip-mined to satisfy the public’s rapacious demand to see it on stage.

But theatregoer Mary Fisher of Rochdale said: “What about the DVD commentary track for The Lion King, or the lifecycle of blue-green algae, or the Black Plague?

“I’d see musicals based on any or all of those. I don’t give a shit.”