The move came after Clegg unveiled a plan for men to have 10 months paternity leave that he should clearly have set fire to as soon as he had written it down.

It is the latest in a series of thoughts that Clegg has not been stopped from voicing and comes hard on the heels of his pledge to stand up for Britain’s hard working alarm clocks.

But now cabinet secretary Sir Gus O’Donnell is to conduct a detailed review of the deputy prime minister’s private office in a bid to establish whose job it is to hit him as hard as they can in the face with a shovel whenever he tries to call a press conference.

A source said: “It seems he may have used the alarm clock horseshit as a diversionary tactic to keep us all confused and angry while he put the finishing touches to destroying the British economy.”

Meanwhile expectant mothers across the country have been dissecting the latest notion to escape from the Lib Dem leader’s skull.

Nikki Hollis, from Doncaster, said: “What about men who get you up the duff and then do a runner? Do they get 10 months off to go and chase more fanny?”

Rebecca Utley, from Radcliffe-On-Trent, added: “Unless my husband’s big fat tits suddenly fill up with milk, he’s probably better off at work showing cute baby pictures to the skanky receptionist in the utterly forlorn hope that she’ll blow him in the bogs.” 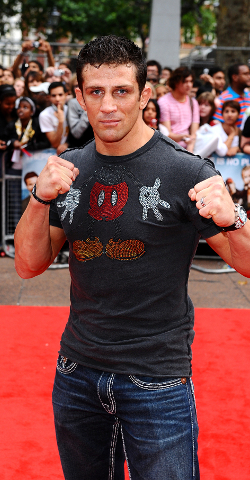 THE writing team behind Jordan is considering killing Alex Reid amid
concerns the story is becoming too complex for its target
demographic.

In the current storyline, the model has ditched her cross-dressing cage fighter husband after she intimidated his sperm, clearing the way for a new male lead, probably a boxer.

But her writers fear it was a mistake to keep a second ex-partner alive.

Script supervisor, Wayne Hayes, said: “We decided to keep Alex around so we could maybe do a sub-plot involving a failed transvestite heist with Essex gangsters.

“But with a new Peter Andre love story and a Kerry Katona revelation planned for next week, we’ve simply got too many balls in the air.

“Plus he was never a popular character in the first place, except with small children and sexually confused bouncers.”

The team are now discussing a number of death options.

Hayes added: “We’ve got this idea that Jordan turns her house into a sort of personal wildlife park for Harvey, with genetically-tweaked pink grass.

“Broken-hearted Alex scales the perimeter fence with a bunch of daffodils and a mid-sized box of Terry’s All Gold, but his stiletto gets hooked in the mesh and he ends up dangling helplessly upside down while timber wolves tear at his liver.

“It certainly has impact and could help pull in pet food sponsors.”

The Jordan concept was created in 1979 by a shadowy group of stocky elderly men known only as ‘The Sigil’, who make everything from electrical tape to perfume and are above the law.