SERIOUSLY, either stop this shit or kill us, Britain's electorate begged last night.

As the country once again found itself watching a political debate on television, voters said they would now be willing to surrender to some form of non-military, quasi-dictatorship like they have in Singapore.

Roy Hobbs, form Hatfield, said: "The first one was fucking shit but then Sky News spent 170 hours telling me that the second one was going to be really good, so I watched it and it was fucking shit."

Last night's highlights included Tory leader David Cameron getting angry about a leaflet that went straight into 20 million bins and a politician who thinks he's Spiderman telling a 16 year-old public schoolboy to get real.

Meanwhile Gordon Brown has assured the man in the audience who was caught yawning that he will watch the third debate with Alistair Campbell gripping the back of his head and pressing his face really hard against the TV screen.

Viewer Helen Archer, from Finsbury Park, said: "When I looked at these three men I did actually feel a creeping sense of pity and an awareness that maybe they should be doing something with their lives that is true to who they really are, instead of going on live TV and daring me to hunt them down with a crossbow.

"So I looked at David Cameron and I realised that he's actually fighting with himself and that he should just give in, become a merchant banker, make millions, have a laugh with his posh friends and free himself from the weight of public expectation so he can finally send his kids to a decent private school.

"And I reckon he'd probably be the sort who'd give quite a lot to charity and run marathons and stuff. Y'know, rich but not a total dick.

"And then I looked at Gordon Brown and thought that if he really wants to share his ideals with the world then he should go back to university and study to become a Presbyterian minister so that he would then have his own, beautifully carved wooden pulpit where he could moralise until he bursts and where his weird smile, his pathological seriousness and his laughable self-regard would all be huge assets.

"And then I looked at Nick Clegg and thought he should be a politician." 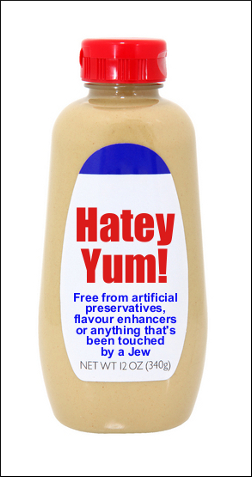 THE British National Party has launched a racially pure sandwich spread for people whose necks are wider than their heads.

Hatey-Yum is a blend of bulldog sweat, Winston Churchill's cigar smoke and the bone marrow of a skinhead virgin.

Party leader Nick Griffin said: "It spreads straight from the fridge and is the final solution to ethnically inferior toast and mongrel baps.

"When you open the lid it plays Hope and Glory and when you close it plays the Horst Wessel song, thereby making it an enjoyable after-school experience for your robust Aryan offspring.

"All other spreadable products are foreign and have a deep seated desire to take your job and turn your house into an halal abattoir. Do not allow them in your fridge – they will rape your cheese."

Mr Griffin added: "There are dozens of communities across Britain who are sick of seeing decent white bread covered in bongo juice and mumbo-jumbo jam and are crying out for something strong and pure that will distort their face into a rictus of hate."

Supermarket manager Nikki Hollis said: "We think people will either love it or hate it, depending on what sort of cretin they are.  Though I have to admit it does actually sound better than Sandwich Spread."

Tom Logan, a shopper from Stevenage, said: "Whatever next, jars of sugary, fruity goo with tokens that you can collect to claim a stuffed dolly that's horribly offensive to black people?"