Farage and Brand wake up in each other’s bodies

Always wondered how he would look with a proper haircut

Farage was surprised to wake up in a rotating, circular bed surrounded by dozing beauties while Brand regained consciousness in a wing-backed leather armchair opposite an oil painting of Lord Mountbatten.

The switch has been suggested as karma, a cosmic joke or simply the reflex action of two minds frantically trying to escape the emptiness of their own lives.

But soon they saw the advantages. Farage recorded a YouTube video exhorting his followers to vote UKIP to bedazzle and discombobulate the establishment, ruined only when he kept consulting a thesaurus.

And Russell Brand spent all morning wearing a blazer in front of a mirror, forbidden xenophobia dripping deliciously from his lips.

By the end, Russell found out that even his most unhinged imaginings paled by comparison to the average UKIP candidate.

“And Nigels insecurities melted away when he realised he was only afraid of Europe because he wanted to have sex with it.

The incident follows a bodyswap between David Cameron and Ed Miliband earlier in the year, which neither man noticed. 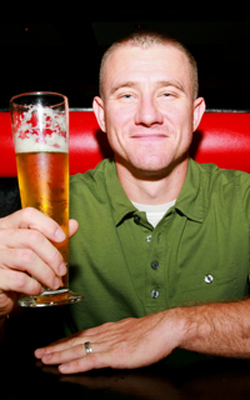 A MAN has ostensibly forgiven the accidental spillage of his pint while maintaining a threat level close to maximum.

Seasoned drinker Julian Cook was enjoying a fourth pint in a Swindon pub when student Roy Hobbs knocked into his table, causing beer to slop onto his leg.

Hobbs immediately made matters worse by getting a bar towel and dabbing at Cooks thigh.

Cook then responded to Hobbss offer of a replacement drink by looking at him like he wanted to stick his hand down his throat and pull out his heart, after which Hobbs retreated to the bar and avoided eye contact for the remainder of the night.

Onlooker Emma Bradford said: That was a masterclass in passive aggression. In fact I’m not sure it was even passive.

What I took from it is that if you spill a strangers pint, nothing can make it better.