Farage launches Why Don't I Just F**k Off? Party

NIGEL Farage is making an electoral comeback with a party dedicated to finally making him f**k off permanently.

The former UKIP leader has failed to be elected as an MP seven times but believes he can finally make Parliament with policies focused on making his smug, gobby, xenophobic, arsehole self disappear.

Farage said: “Why Don’t I Just F**k Off? has a raft of policies ranging from marooning me on a desert island, firing me into deep space or locking me in a Qatari prison. And these policies are incredibly popular.

“They’ve been rigorously focus-grouped and they are without doubt what the public want. And I want attention and don’t mind leading crowds in chants of ‘F**k off Farage!’ if that’s what it takes.

“Once I’ve been elected we’ll hold a referendum on whether I’m sentenced to 70 years in a one-man gulag in the Outer Hebrides, or sealed in a cylinder and lowered to the bottom of the Atlantic Ocean. And believe me, we’ll abide by the result.”

Voter Nikki Hollis said: “I’m slightly concerned that Nigel won’t really f**k off forever, after all the other times, but it’s our only hope. I’ve donated five grand.”

Six ways to fake your own death, by Boris Johnson 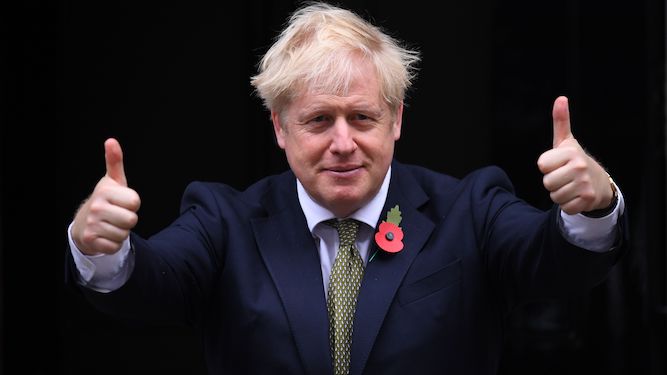 EVER found yourself trapped in an intolerable situation you can’t back out of? Faking your own death might be the answer. This is what I’m considering:

I’ve got form for being unable to use a zipline and I bought my own severed head off Slowthai, so this one’s all set up. All I need is a fat man’s body and they’ll be littering the streets before long. And then I begin my new life in Paraguay.

Why leave clean when you can leave a massive f**king mess behind for your enemies to sort out? As David Cameron told me. Simply vanishing from Brussels will lead to accusations of murder and quite possibly a war while I’m sipping negronis in Volgograd.

If you’ve been keeping your hand in by screwing about six posh girls a week, as I always have, then the motive for murder is never far away. Choose the least stable, stage a row, slather the bathroom in pig’s blood and the police won’t look any further. Don’t worry, she won’t do time, she’s rich.

The best bit about this one is you get to write a really long note blaming everyone, from that unsupportive bastard Starmer to that snake Gove, and the media will have to publish it. That’ll teach them for being mean to you, you’ll laugh from your palace in Pyongyang.

There’s a real danger that the Boris premiership won’t be remembered as a golden time for the nation, what with Covid and the recession and no-deal Brexit. But who will remember all that when I’m the first prime minister to spontaneously explode in the Commons? Nobody.

Just announce it in the Times

Lies work better the more blatant they are. Take an advert announcing your sad demise in the Times and move to a flat in Canary Wharf. When challenged say ‘I’m not Boris,’ with a roguish smile and carry on doing whatever you want, as usual. Trust me, it always works.