Good God, This Country Is Full Of Immigrants, Says Brown

GORDON Brown last night said he was amazed to discover that Britain had quite a lot of immigrants.

The prime minister said that if only he had known he would have done something about it, but now they are here they should all talk properly and watch Antiques Roadshow.

Mr Brown added: "As soon as I found out there were immigrants I asked for a full report and I am now pleased to confirm that after a decade of them sneaking in willy-nilly, last year only two foreigners arrived in Britain, both clutching an old wooden clock and asking for Fiona Bruce.

"However, I accept there are still quite a few unusual-sounding people in this country who insist on maintaining a culture that can often seem at odds with Britishness, such as working really hard and minding their own business."

The prime minister said foreigners are often to be found crowded into East London constituencies where local, indigenous majorities of less than 8000 can easily feel threatened.

He added: "I have no idea how they got here but I will do everything I can to make sure they all get their clocks valued at a stately home and that if you shut your eyes you would swear you were talking to Adam Woodyat or Martine McCutcheon."

Calling for a calm and rational debate, Mr Brown said: "I think it's very important that politicians do not use immigration as a political football, especially the racist ones in the Conservative Party.

"We must treat this issue sensitively, unite against extremists and I've got fifty quid right here for anyone who can actually tell me the difference between the Tories and the SS." 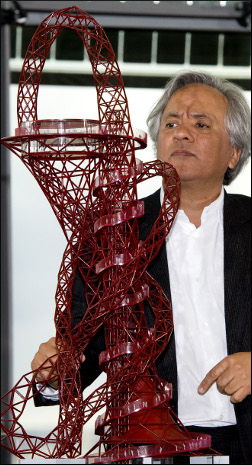 The Stratford tower will be shaped like a lower intestine and hold up to 350 heavily-armed maniacs from every corner of the globe.

A restaurant built into the structure will ensure that anyone planning a lengthy siege will be amply catered for with Michelin-standard cuisine and five star service.

Kapoor said: "I wanted to create something that would inhabit the space rather than define it while at the same time giving disaffected loners a fantastic array of kill shots."

London mayor Boris Johnson added: "I love it, it's just like being given the Meccano set I asked for when I was eight, instead of the signed photo of Alec Douglas-Home and the new pair of sodomy trousers that I actually got."

Alternative structures were considered by Johnson, including a 'Mugger Of The South' by Antony Gormley – a 300-foot steel and copper depiction of a skunked-up teenager knifing somebody in the kidneys for their iPhone.

Other designs included Banksy's policeman wearing a clown mask, which critics said was a 'wry comment about something, possibly capitalism' while former prime minister Tony Blair suggested another dome.

Johnson insisted the tower will help the UK team garner a record haul of medals as it will be the perfect vantage point for picking off better and more successful athletes from Jamaica and the United States.

Wayne Hayes, a recently-sacked postman from Ilford, said: "My burning hatred of all humanity has only just begun, but by 2012 I estimate I will have some particularly lucid theories about why the blacks and the Jews got me fired for stealing birthday cards."

He added: "This is my gun. She's called Cheryl."