THE Labour Party has urged its vote riggers in key marginal seats to make it look as if quite a lot of fictional people have voted Liberal Democrat. Peter Hain tactically forgot to declare a hundred grand, while Ed Balls has the sort of face you could tactically punch all day

With polling just two days away, senior Labour figures said the postal votes of people who don’t exist should be used to stop the Tories, but not in the sort of really obvious way that even a British policeman would notice.

One source said: “As we enter the jiggery-pokery stage, it is vital that fictitious Lib Dem voters use their non-existent heads instead of their imaginary hearts.

“These voters that we’ve made up are intelligent, sophisticated and know who would have won in their constituency if we hadn’t been up all night inventing names for them.”

The source added: “Many of the people we have concocted have still to make up their minds, but we believe that in the last 48 hours we can imagine we are persuading some of them to vote tactically.

“If successful we can create a permanent alliance of progressive fraud that can finally stitch-up the voting system and fill the House of Lords with democratically elected thieves.”

Julian Cook, professor of politics at Reading University, said: “In an election full of uncertainty the one thing we do know is that Gordon Brown is now a vomit-flecked wheelie bin filled to the brim with putrefying sheep guts.

“Therefore urging people to vote tactically in a way that would ultimately result in ED BALLS BEING THE PRIME MINISTER OF THIS COUNTRY would seem to be a particularly ill-advised tactic.

“Unless of course you actually want Ed Balls to be prime minister in which case I am going to find out where you live.” 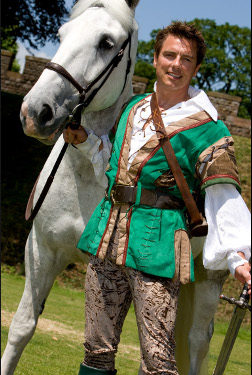 Next time he'll use a horse

A group of Christians, led by prospective Tory MP Phillippa Stroud, claimed that mumbling in a Church would cause the supernatural evil that causes Barrowman’s insatiable lust for manflesh to leave his body forever.

Despite widespread scepticism throughout the non-mental community, the Christians’ plan started impressively when their prayers manifested themselves as a host of stridently heterosexual, gossamer-winged angels.

But when the heavenly messengers confronted Barrowman coming out of a sauna and showed him some pictures of vaginas, they soon found themselves face to face with the sodomy-loving demon that has possessed the actor’s soul.

Appalled eye-witness, Tom Logan, said: “Mr Barrowman winked at the angels and then bent over and touched his toes.

“At that moment an astonishingly well-built, semi-naked traffic policeman sporting a big brass cock ring popped out of his bottom in what seemed to me to be a blasphemous parody of the virgin birth.

“It belched an evil black cloud of gayness at the angels, which enveloped them and immediately made them confused about their sexuality. They started kissing and licking each other’s firm, sculpted wings in a lascivious way.

“I dont want to go into the rough, hard details about what happened next, but let’s just say that I hope Jesus has stocked up on donut cushions and Germolene.”

He added: “The whole thing was like a much less gay version of Torchwood.”