May: I will never forgive you for feeling sorry for me

THERESA May has vowed to humiliate and destroy everyone who felt sympathy for her yesterday.

The prime minister, who later tweeted a photo of the troublesome rat skull that was stuck in her throat during the speech with the caption ‘Cleared it!’, said it was an outpouring of ordinary human emotion that she will never forgive.

She continued: “Your empathy for my misfortune has left me feeling soiled. Only a purge can make me clean again.

“If you said ‘Ooooh,’ while I coughed, if you covered your eyes unable to watch while I was mocked by a BBC Three comedian, if you dared to feel pity, then my revenge will be great.

“Don’t delude yourself. I am not weak like you. This was a momentary malfunction, that’s all, one that has been corrected and officially never happened.”

May added: “You, Joseph Turner of Stoke-on-Trent. Our monitors heard you saying ‘Poor cow,’ during the News at Ten last night. Today, they will come for you.

“I will see you broken for what you have done. And I will not feel for you one bit.” 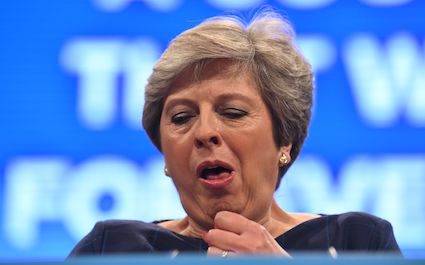 Cameron has admitted he can no longer be considered to be in the running, though friends and former colleagues assured him he put up ‘one hell of a fight’.

He said: “I mean I called the Brexit referendum. You’d think that alone.

“But in my favour I did win one election, and another one sort of, and I handled the Scotland thing okay, and I did a few things that some people liked, and yeah. Low bar to clear I know.

“So okay, Theresa, you beat me, you are without competition the worst leader Britain has had this century. And I’m saying that and I fucked a fucking pig.

“You can resign now. Don’t believe your advisers when they say the only way is up. They don’t know you like I do.”

Following the statement, the British people realised the second-best prime minister of the 21st century was a miserable, inept dick they got rid of at the first opportunity, and the unquestioned best one was a war criminal.