Nigel Farage 'just a comic creation that got out of hand'

‘NIGEL Farage’ is a fictional parody of a raving idiot, it has emerged.

Farage’s real identity is that of alternative comedian Wayne Hayes, who began performing the character of right-wing buffoon Nigel Twatley Farrago O’Drivel in 1986.

After years of struggle on the stand-up circuit, Hayes as the now-refined ‘Nigel Farage’ was booked for a function at the Dorchester Conservative Club. But instead of laughing at his foghorn-voiced bletherings, the audience responded with thunderous applause.

Hayes said: “My agent recommended I join UKIP as a stunt. So I went along to their conference and did my turn.

“I thought I’d really ratchet up the nonsense – ‘We, the roast beef of England will not be dictated to by Brussels sprouts.’ They lapped it up.”

After a lucrative run of gigs, Hayes decided it was time to kill off Nigel Farage and staged a plane crash. However, such was the outpouring of concern that he felt obliged to have the character recover with minor injuries.

Hayes said: “I feel a responsibility to my thousands of fans. Plus, I don’t know what they might do if they found out ‘Nigel Farage’ was a spoof – beat me to death with a garden hoe, or something. They’re all completely insane.

“Now I’m on Question Time nearly every month. It’s more regular than stand up plus they give you wine and sandwiches.” 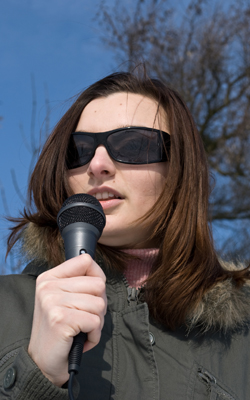 HOUSEHOLDERS in the South West are barricading themselves into their waterlogged homes to avoid being patronised.

Following torrential rain, areas of the UK have been deluged by cloyingly sympathetic news reporters with a barracuda-like instinct for heightened emotion.

Flooded father-of-two Tom Logan said: “I’ve put down sandbags and nailed the door shut, but it doesn’t make any difference, the journalists come down the chimney.

“They keep asking me ‘how gutted are you?’ and ‘what does it feel like to see your home in ruins?’ while touching my shoulder in an overly empathetic way.

“I just say ‘my house is full of water that smells of shit and piss, how do you think I feel?’ but that’s never enough, they seem to want a full emotional collapse.

“As the flood waters recede they’re getting increasingly desperate for me to cry on camera while I’m still vulnerable.

“Sometimes during the interviews they hold up a picture of a dead baby otter, just out of shot.”

Householder Emma Bradford said: “This happened last summer but since then the government has actually cut back on anti-journalist defences.

“I spent my own money on a huge aggressive rottweiler but now the papers are calling it ‘plucky hero dog’, apparently its got its own Twitter feed and an ITV2 series deal.”