Parents urged to stop telling kids to believe in Corbyn

TELLING children Jeremy Corbyn is real can cause serious trust issues when they eventually find out he doesn’t exist, it has been claimed.

It had long been believed that Corbyn, a kindly white-bearded man who gives children free toys for no reason, was a harmless childhood myth.

However Professor Henry Brubaker of the Institute for Studies said: “Eventually they’ll have to find out that he isn’t real, and then what are you going to tell them? That it was all a lie to give them some false hope in a cold and unfeeling universe?

“They’ll start asking whether Nigel Farage is real too and you’ll have to tell them yes, he actually is.

“You can still give them a new bike on the 25th of December if you like. You shouldn’t wrap it up for them though as that’s kind of a lie too.”

Seven-year-old Wayne Hayes said: “Corbyn, or Corba as he’s sometimes called, lives at the North Pole. Lots of elves help him in his toy warehouse but in a strictly non-hierarchical situation where any profits are channelled back into reindeer food.”

Castro mourned by people who have confused him with Che Guevara 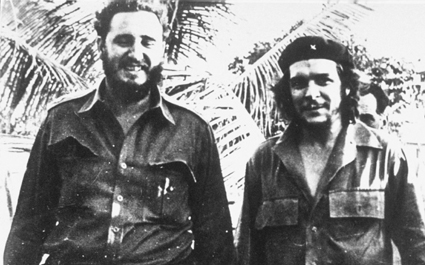 PEOPLE who think Fidel Castro was Che Guevara are mourning his death.

Thousands who only have the mental capacity to process one bearded man in khaki have decided that it was probably Guevara who died over the weekend.

38-year-old Martin Bishop said: “I think Che did a brilliant job running Cuba for years, which can’t have been easy after his best mate Fidel Castro got shot.

“I used to have a poster of Che or Castro in my student house. I was really into their political beliefs, whatever they were.

“We had a Bob Marley poster before that but it got ripped down during a house party.”

Castro was a divisive figure in his homeland, where he was equally lauded as a freedom fighter and reviled as a hipster who spent his people’s money on retro military outfits bought from vintage clothing websites.