Queen’s Speech ends with ‘f**k this’

THE Queen’s Speech has ended abruptly with the words ‘fuck this,’ spoken halfway through a sentence, before the monarch wandered off.

The speech, a series of meaningless commitments, proceeded as normal until Her Majesty paused, looked around the chamber and decided she had had enough.

Julian Cook, Tory MP for Norfolk South, said: “She was supposed to be moving on to our exciting new plans to regulate the internet as a prelude to closing it down entirely, but instead she just stopped, sighed and looked at us with an expression of severe disdain.

“Her withering gaze seemed to turn on the front bench before she said ‘fuck this’ very clearly. Everyone heard it. Beautiful enunciation.

“Then she left, got into the back of the Rolls and shouted, ‘Ascot and pronto’.”

Labour MP Roy Hobbs said: “I wasn’t expecting to agree with any of it, but I think her final proposal will win enthusiastic cross-party support.”

Business bullshit ‘vital’ for people who are bad at everything else 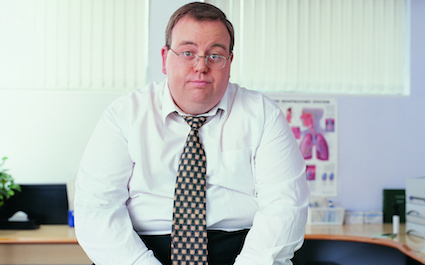 POMPOUS business bullshit is vital for maintaining the self-esteem of people who are crap at everything else, research has found.

A new study has discovered that if unable to make statements like ‘action that vision document for a quick win’, most businesspeople will find themselves feeling unimportant and worthless.

Professor Henry Brubaker, of the Institute for Studies, said: “Self-esteem is derived from being good at something. But those who can’t do anything well are drawn to the business world, where you are respected rather than laughed at for using expressions like ‘paradigm shift’ and ‘bleeding edge’.

“Suddenly they can give Powerpoint presentations and nobody is allowed to look away. The world hangs on their every word of regurgitated jargon. They can be proud.”

Strategic marketing manager Roy Hobbs said: “Not many people can proactively amplify core marketing messages in a dynamic business ecosystem like I do.

“I’ve been nominated as Marketing Professional of the Year (Shelving) by Materials Handling World magazine two years running. There’s nothing wrong with my self-esteem.”