EVERY candidate for the Tory leadership has said they were visited by the ghost of Margaret Thatcher.

It was claimed that Thatcher’s ghost visited each of the candidates over the last week to inform them that, in her ghoulish opinion, they could definitely run the country.

Michael Gove said:  “I awoke when the owls outside my woodland cave began hooting loudly and when I came out Mrs Thatcher’s ghost was beckoning.

“She then implanted a vision of Britain in my brain. She also said that Boris was a twat.”

Favourite Theresa May added: “I heard a noise outside my coffin, I mean my bedroom, and when I came out there she was.”

Creepy former defence secretary Liam Fox claimed: “I was working in a shelter for the homeless when Thatcher’s ghost came to me. Totally true.”

Devout Christian Stephen Crabb said: “I woke up in my own bed and with my female wife when Thatcher told me I should run. It made me feel very manly.”

Meanwhile, Andre Leadsom insisted: “I’d been up all night drinking moonshine with some Hungarian builders when I saw the ghost.

“So, I can’t be sure if it was a dream, a vision or the by-product of all the moonshine, but she definitely told me I was ‘the one’.” 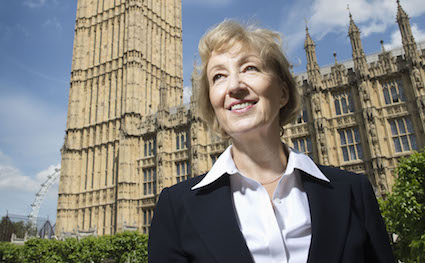 THAT Andrea Leadsom, who wants to be prime minister, sounds like a total pain in the arse, it has been agreed.

In an interview with the leading Sunday newspaper for elderly xenophobes, Mrs Leadsom reveals that not only does she think she is the ‘new Thatcher’, but that she is also a ‘very committed Christian’.

Professor Henry Brubaker, from the Institute for Studies, said: “And she made a fortune working in the City. So she’s a greedy, sociopathic god-botherer. What an absolute fucking beezer of a combination.”

He added: “On behalf of the country, I just want to thank the Conservative Party for offering such a dazzling array of candidates.

“Two half-baked Thatcher clones, an evil woodland troll, a Welsh Christian homophobe with an untrustworthy beard and the creepiest man in politics since Norman Tebbit.

“The Conservative Party hates Britain. If you can’t see that you shouldn’t be allowed to use a knife and fork.”