DAVID Cameron has confirmed that he well and truly fucked that up.

Addressing the nation from the steps of Number 10, the prime minister said: “Christ almighty, what the hell was I playing at?

Pausing for reflection, he then added: “Actually, you know what? Go fuck yourselves you bunch of ghastly, ill-educated, working class tits.

“What have you ever done? I was prime minister for six years, meanwhile you were all doing your best to qualify for the Jeremy Kyle Show.

“And let’s just see how Sunderland gets on when Nissan moves its Qashqai factory to Bulgaria. That will cheer me right up.”

Mr Cameron then stood silently in front of the media while giving the finger with both hands.

You have made this man happy 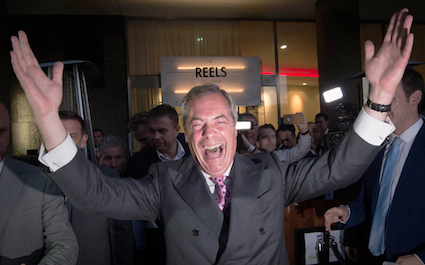 YOU are responsible for the overwhelming happiness of this man, Britain has been told.

The 52 per cent of the country that voted for the UK to leave the EU has been asked to look at the pictures of this man and to think about what they have done.

A government source said: “No, don’t close your eyes. Focus. Focus on his face-splitting grin and tell me you’re proud of yourself.

“Look how utterly delighted he is. He’ll probably go out and treat himself to a new blazer for tonight’s party with all of his friends, where the women are in a separate room.

“And afterwards, buoyed up on good brown ale and a few whiskies, still turgid, he’ll probably attempt intercourse. Picture that. Hold that picture in your mind and know that you made it happen.

“You had your reasons, I’m sure. You were concerned about etcetera. You strongly believe that something. Whatever.

“But this is what you have wrought. Look how absolutely fucking overjoyed he is. That’s on you.”